Saturday Is Old Radio Day: The Saint starring Vincent Price in "Murder on the High Seas" 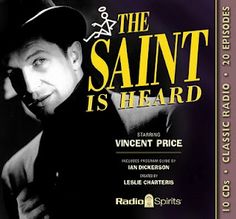 
The Saint was a radio adventure program in the United States that featured a character ("a swashbuckling, devil-may-care Robin Hood type who, in his attempt to help people, remained just one step ahead of the police and crooks—both of whom he combatted") created by author Leslie Charteris. As the program's introduction said, The Saint (the alias of Simon Templar), was "known to millions from books, magazines, and motion pictures." Several versions of the program appeared on different networks.