Where Tax Dollars Go: Port of Los Angeles and the Chinese 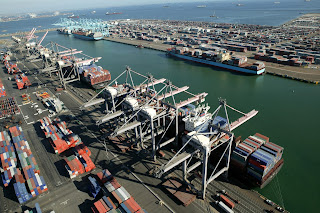 LATimes report by Jack Dolan and Tony Barboza, "Port of L.A. helped pay for cleaner China Shipping vessels--which later stopped docking in L.A." in which China appears to have siphoned some millions from the Port of Los Angeles:


The Port of Los Angeles paid a Chinese government-owned shipping company $5 million in 2005 to equip cargo vessels to plug into electric shore power while at dock to keep their massive diesel engines from polluting neighborhoods near the harbor.

The company, China Shipping, used the money to upgrade 17 ships, but the city didn't get all the promised environmental benefits. Most of the vessels stopped traveling to Los Angeles in 2010, a Times review of shipping industry data showed.

If the Port of LA agrees to pay me $5 million, I will promise to not pollute its neighbors.  I will also agree to not use the Port any less than I currently do.

If you were wondering, the ultimate owner of China Shipping is COSCO (China Ocean Shipping (Group) Company), a Chinese government-owned entity.
Posted by Mark Tempest at 3/25/2016 06:31:00 PM

Email ThisBlogThis!Share to TwitterShare to FacebookShare to Pinterest
Labels: Fun with China, Port of Los Angeles