Ok, so Hillary Clinton says Benghazi was a tragedy 'politicized' by opponents. 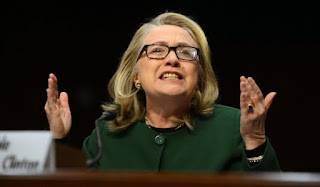 Let me see if I can get this straight - a politician, who once occupied a high office, and is currently running for the presidency, is complaining that her performance in that former office was "politicized" by other politicians who had the nerve to ask questions about that performance in office?

Yes, I know. This current "fauxrage" by Ms. Hillary is just silly. She might as well assert that her political campaign to become president is being "politicized" by Mr. Sanders, her opponent in the Democratic primaries.

Perhaps someone should remind Ms.Clinton that we have a political system. With two parties. And one party may frequently take swipes at the performance of the politicians of the other party. And, sometimes, even by members of your own party.

Next thing you know she'll be under investigation for something she did while in office . . .

Oh, the horrors. It's so hard being a victim. All the time.