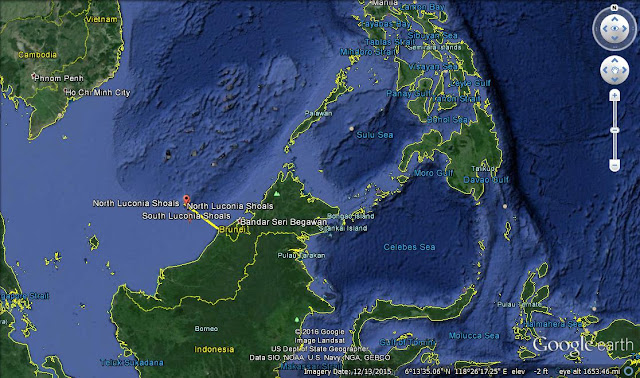 
About 100 China-registered boats have been detected encroaching into Malaysian waters
near the Luconia Shoals in the South China Sea, a Malaysian minister said.

Shahidan Kassim, a minister in charge of national security, said the government has dispatched the Malaysian Maritime Enforcement Agency and the navy to the area to monitor the situation.

Shahidan was quoted by the national Bernama news agency on Friday as saying that legal enforcement action would be taken if the Chinese vessels are found to have entered Malaysia's exclusive economic zone.


Shahidan did not specify what type of Chinese vessels had been spotted but a Maritime Enforcement Agency official said they were fishing boats guarded by two Chinese coastguard vessels.

China claims most of the South China Sea through which about $5 trillion in ship-borne trade passes every year. Its Southeast Asian neighbours Brunei, Malaysia, the Philippines and Vietnam, also claim parts of the sea, as does Taiwan.

China's foreign ministry spokesman, Hong Lei, asked about the Malaysian report at a briefing on Friday, said he did not "understand the details" of what Malaysia had said.

"Now is the fishing season in the South China Sea ... At this time of year, every year, Chinese trawlers are in the relevant waters carrying out normal fishing activities," Hong said. He did not elaborate.

In the GoogleEarth image above, the yellow line from the shoals to the nearest point in Malaysia is about 110 miles. Under the United Nations Convention on the Law of the Sea (UNCLOS),  "Exclusive Economic Zone (EEZ)" is defined:


The exclusive economic zone is an area beyond and adjacent to the territorial sea, subject to the specific legal regime established in this Part, under which the rights and jurisdiction of the coastal State and the rights and freedoms of other States are governed by the relevant provisions of this Convention.

Artificial islands, installations and structures in the exclusive economic zone

1. In the exclusive economic zone, the coastal State shall have the exclusive right to construct and to authorize and regulate the construction, operation and use of:

(b) installations and structures for the purposes provided for in article 56 and other economic purposes;

(c) installations and structures which may interfere with the exercise of the rights of the coastal State in the zone.

2. The coastal State shall have exclusive jurisdiction over such artificial islands, installations and structures, including jurisdiction with regard to customs, fiscal, health, safety and immigration laws and regulations.

3. Due notice must be given of the construction of such artificial islands, installations or structures, and permanent means for giving warning of their presence must be maintained. Any installations or structures which are abandoned or disused shall be removed to ensure safety of navigation, taking into account any generally accepted international standards established in this regard by the competent international organization. Such removal shall also have due regard to fishing, the protection of the marine environment and the rights and duties of other States. Appropriate publicity shall be given to the depth, position and dimensions of any installations or structures not entirely removed.

5. The breadth of the safety zones shall be determined by the coastal State, taking into account applicable international standards. Such zones shall be designed to ensure that they are reasonably related to the nature and function of the artificial islands, installations or structures, and shall not exceed a distance of 500 metres around them, measured from each point of their outer edge, except as authorized by generally accepted international standards or as recommended by the competent international organization. Due notice shall be given of the extent of safety zones.

6. All ships must respect these safety zones and shall comply with generally accepted international standards regarding navigation in the vicinity of artificial islands, installations, structures and safety zones.

7. Artificial islands, installations and structures and the safety zones around them may not be established where interference may be caused to the use of recognized sea lanes essential to international navigation.

8. Artificial islands, installations and structures do not possess the status of islands. They have no territorial sea of their own, and their presence does not affect the delimitation of the territorial sea, the exclusive economic zone or the continental shelf.

The Republic of Indonesia (RI) has a beef, too, Govt: RI does not recognize
China's ‘traditional fishing zone’:


Via a chargé d'affaires at the Chinese Embassy in Jakarta in a meeting with Foreign Minister Retno LP Marsudi earlier this week, the Chinese government denied that the Chinese fishing vessel and the country’s coast guard had violated Indonesian territory, claiming they had been in an area China calls its “traditional fishing zone”.

“In a verbal communication conveyed by the chargé d'affaires of the Chinese Embassy in Jakarta, they said the incident occurred in China’s traditional fishing zone,” Retno said at the Office of the Coordinating Political, Legal and Security Affairs Minister in Jakarta on Thursday.

The minister added she had explained to the Chinese representative that Indonesia did not recognize the so-called traditional fishing zone.

“In the meeting we asked: ‘What does the traditional fishing zone mean?’ to clarify the meaning of this terminology,” said Retno.

“We don’t recognize this terminology at all. And, based on what reasons could this terminology exist?” she went on.
***
In the protest note, Indonesia conveyed three points of objection to measures taken by the Chinese maritime security patrol, which Jakarta believes protected illegal fishing activities in Indonesian waters.

In the first point, the Indonesian government protested the Chinese maritime security vessels, which contravened Indonesia’s sovereignty and jurisdiction over its Exclusive Economic Zone (EEZ) and continental shelf areas.

As previously reported, two Chinese vessels, namely fishing vessel MV Kway Fey and a coast guard vessel, were involved in an incident with an Indonesian patrol boat at around 2:15 p.m. local time on Saturday.


Several nations have expanded their use of non-military assets to advance their territorial and maritime claims in the East China Sea and South China Sea. Most notably, China is using a steady progression of small, incremental steps to increase its effective control over disputed areas and avoid escalation to military conflict.

Yep, the old "wear you out to wear you down" approach."