Somalia: Puntland challenges U.S. Navy to do something or go away

A Cabinet minister in Somalia's Puntland State government has called on the United States government to withdraw its naval forces from Somali shores or help in the campaign against local pirates.

Said Ahmed O'Nur, Puntland's Fisheries and Ports Minister, told Voice of America' s Somali-language program that U.S. Navy warships have been watching a hijacked ship for nearly two months without taking any military action against the pirates on board.

He indicated that there is "no communication" between the U.S. Navy and the government of Puntland.

According to the minister, the U.S. naval warships "allow" the pirates to go to and from the ship - Russian-registered Svitzer Korsakov, which pirates hijacked on Feb. 5.

"Local fishermen are not allowed to take their boats to sea," Minister O'Nur said during the interview.

He stated that locals informed the Puntland government that U.S. sailors disembark from their warships and use small boats to fish, adding: "Who allowed them to fish along our [Somali] coast?"

The Fisheries and Ports Minister called on the U.S. Navy to withdraw its ships from the Puntland coast or "convince the [Puntland] government about what they are doing there."

He also indicated that there are "many rumors" about reports of nuclear waste being dumped along Somalia's shores, which the Puntland government is to investigate.

Ignore the nuclear waste issue, that's just baloney, but consider the sovereignty issues posed by Puntland, which is not a recognized state, but a "breakaway" province of greater Somalia. Who has the power to permit the U.S. to take action in Somali waters?

UPDATE (3/18/08): Looking for suggestions on how to respond to this? First, write a nice note: 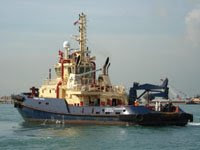 Dear Minister Said Ahmed O'Nurm:
Nice to hear from you in your recent interview with the Voice of America. Some of our ships, it is true, are visiting the international waters off the coast of Somalia after having chased some pirates into Somali waters. You might recall that some of our efforts to keep the pirates from being resupplied resulted in some controversy (see here,here,here, here).

In fact, the last we heard, Puntland soldiers were working to cut off supplies to the pirates who still hold the ship. How's that effort going? You forgot to mention it during the VOA interview. Oh, and about that "no communication" thing? Here's number for the U.S. Department of State (1-888-Tal-KLOT). If you want to chat, they have specialists who do just that. They might have a little trouble finding Puntland on the map, because they sorta think you are part of Somalia, so good luck.

Now, as to your fishing boats. They are free to go fishing if they follow some simple rules:

(1) They should assemble in one spot when they are ready to leave port and should proceed in a group to sea;
(2) They should fly a white flag on each boat;
(3) They should not approach the captured vessel;
(4) They should head out to sea and go fishing.

As long as they do those 4 simple things, they will not be bothered. However, there are a couple of things they should not do or we will have to take action:

By the way, since you are part of the Puntland governing body, we would like to point out that the pirates do have their captured ship and crew in the territorial waters off your coast. Under International Law, this means they are either your problem and its up to you to do something or its the problem of the Somalia government. We'll be happy to assist with planning if you all can figure out who is in charge. You can find us on one of the big gray ships off the coast near the captured ship.

As an additional thought, you might want to start thinking about blaming the pirates for all the trouble they have started, because, believe me, we would not be bobbing around out here if they hadn't grabbed that ship. And all those other ships...

Best regards,
Your friends in the United State Navy

Of course, after the nice letter, you make sure that the hostages are safe and at the first sign of trouble, you kick...