Somali Pirates: One that got away 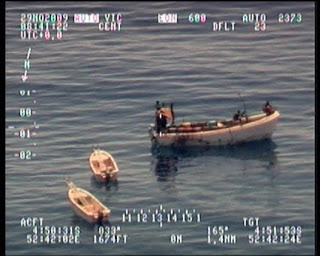 On 30 December at 9.15am the helmsman on the bridge sights a fishing boat. “Somali pirates use fishing boats as mother ships. This allows them to work 600 miles off the coast. The fishing boats are equipped with a so-called skiff, a polyester speedboat measuring five to six metres with a powerful outboard motor, which can make 25 knots in a calm sea.” “In less than ten minutes we see the skiff heading for us, but because of the waves it isn’t making much headway. To be on the safe side, I change course by 90 degrees, so I’m sailing directly into the waves.” This makes it harder for the pirates to draw alongside. “On both port and starboard they then have to deal with around two-metre waves.”

Photo from the capture of a "pirate attack group" by the Portuguese Navy Frigate Alvares Cabral found here.
Posted by Mark Tempest at 1/04/2010 11:14:00 AM