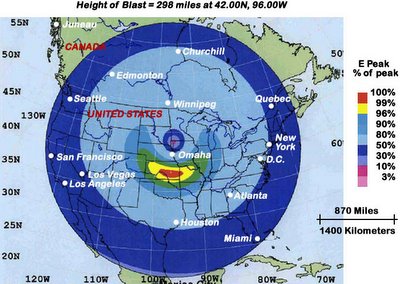 Despite the headline of this book review Electro-Magnetic Pulse: The Biggest Threat No One Talks About, there's been a lot of discussion on EMP.

An EMP attack damages all unprotected electronic equipment within the blast's "line of sight" (the EMP's "footprint" on the earth's surface). The size of the footprint is determined by the altitude of the explosion. The higher the altitude, the greater the land area affected. A Scud-type ballistic missile launched from a vessel in U.S. coastal waters and detonated at an altitude of 95 miles could degrade electronic systems across one-quarter of the United States. A more powerful missile launched from North Korea could probably deliver a warhead 300 miles above America--enough to degrade the electronic systems across the entire continental United States.

Such an attack would not require state-of-the-art missiles. Neither high accuracy nor a long range would be necessary. On the contrary, the report notes, terrorists or state actors could deliver an EMP attack with a “relatively unsophisticated missile.” And yet today, we remain defenseless against even an “unsophisticated” missile attack. It is worth noting that although the EMP threat from “terrorism” and “non-state actors” figure prominently in the report, Reuters’ reporting mentions neither, and notes only that North Korea and Iran could be seeking such a capability.

What follows is FIg. 4 from Report of the Commission to Assess the Threat to the United States from Electromagnetic Pulse (EMP) Attack Volume 1: Executive Report 2004 (available as a pdf download from this -uh- somewhat "doomsaying" site):

Each critical infrastructure in the US is dependent upon other infrastructures (Figure 4). The interdependence on the proper functioning of such systems constitutes a hazard when threat of widespread failures exists. The strong interdependence of our critical national infrastructures may cause unprecedented challenges in attempts to recover from the widespread disruption and damage that would be caused by an EMP attack. All of the critical functions of US society and related infrastructures—electric power, telecommunications, energy, financial, transportation, emergency services, water, food, etc.—have electronic devices embedded in most aspects of their systems, often providing critical controls. Electric power has thus emerged as an essential service underlying US society and all of its other critical infrastructures. Telecommunications has grown to a critical level but may not rise to the same level as electrical power in terms of risk to the Nation’s survival. All other infrastructures and critical functions are dependent upon the support of electric power and telecommunications. Therefore, we must make special efforts to prepare and protect these two high-leverage systems.

Nice pictoral demonstration of Interdependent Infrastructure Sectors from page 17 of the report: 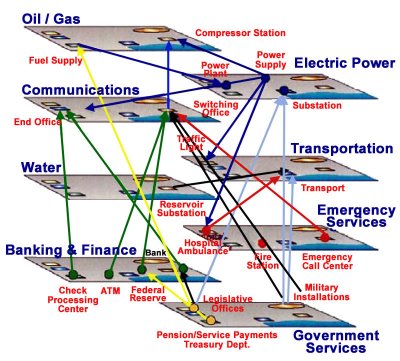