Reported here, some speculation over the Chinese Navy and a possible aircraft carrier:

There is tight security surrounding the Varyag in Dalian harbor, but work on the vessel is clearly visible from nearby highways.
Recent photographs show extensive repairs or maintenance to the carrier's superstructure and deck.
"There is a lot of work happening on that thing which is not consistent with a gambling casino," Fisher said.

More on the Varyag here at Varyag World.com, including this photo, which I have liberated: 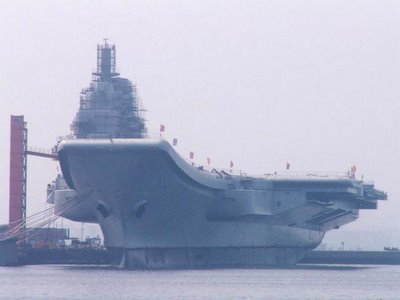 I love a mystery.

Varyag World also posts links to articles dealing with the fate of other other Russian aircraft carriers like Minsk (amusement park?) and Kiev (tourist attraction?). Sort of like the USS Alabama, I suppose. but it seems odd to use a ship from another country's navy...
Posted by Mark Tempest at 1/31/2006 01:09:00 PM