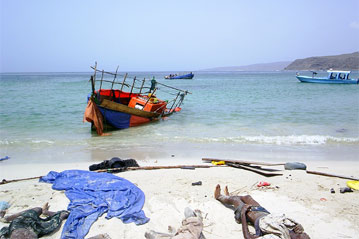 Caption: The bodies of asylum seekers forced to jump off of a traffickers' boat wash ashore in Yemen, last September. © SHS/N.Bajanoub

Not enough that guns and pirates are rampant in and around Somalia, I guess, so let's throw in some people smuggling as reported here:

UNHCR Spokesman, William Spindler, says another 14 people reportedly died during the voyage. Among them, he says, were six people who threw themselves into the sea because they could not bear the thirst. He says the bodies of eight other people who died on board of thirst and hunger were thrown overboard.

"The boat left port near Bossaso in the Puntland region of Somalia with little food or water, allegedly to maximize space for its human cargo," he said. "After its engine failed, the boat drifted in the Gulf of Aden for six days, with passengers growing hungrier and more desperate by the hour. UNHCR staff in Yemen arranged medical assistance for survivors-some of whom had bite marks from crazed fellow passengers."

...In September, the UNHCR called for international action to stem the flow of desperate people across the Gulf of Aden. This followed a particularly bad three-week period in which 150 people died. UNHCR Spokesman Spindler says the agency is forced to renew this appeal because no action has been taken.

And don't forget the starving masses in Somalia whose WFP supplies are being interdicted by the pirates...
Posted by Mark Tempest at 1/20/2006 05:57:00 PM