Somali pirates "worst in the world" 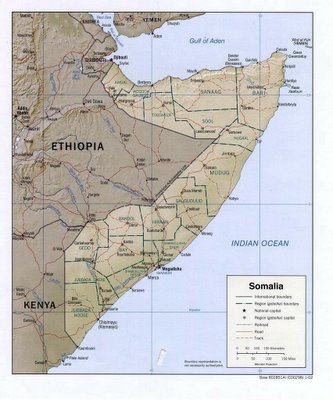 I guess if they take pride in being Number 1, then the pirates of Somalia are full of themselves today after the BBC says: "Somali piracy is worst in world".

An increase in piracy off the Indian Ocean coast of Somalia has made these waters the most dangerous for pirate activities in the world.

Shipping companies say the area has overtaken those traditionally plagued by piracy such as the Straits of Malacca in south east Asia.

The pirates generally use speedboats to steal trading goods or food aid - sometimes impounding ships and crew at gunpoint and then demanding ransoms before they are released.

Somali clan leaders have just signed an agreement to try to end over two decades of factional fighting in the country - and they say they have also made attempts to address the piracy problem.

But the high level of lawlessness off the long eastern Somali coastline reflects the level of chaos there has been on the ground in the country for more than a generation.

The problem does not affect the northern coast of the self-proclaimed and more stable Somaliland as much.