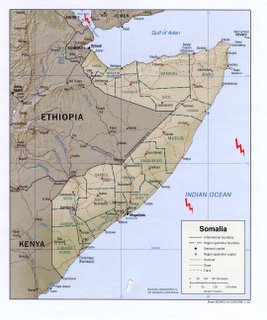 22.01.2006 in position 02:48N-048:36E, off east coast Somalia.
Pirates armed with guns hijacked a general cargo ship underway. They fired warning shots and threatened the 20 crew members. They are demanding a ransom for the release of the crew and ship.

20.01.2006 at 0700 LT in position 05:25.1N - 052:34.6E, 213nm east of Somali coast.
Two speedboats, operating from a mother ship chased a bulk carrier underway. One boat had three men with machine guns and the other had two men. They opened fire aiming for the bridge. Boats came close to ship and persons inside attempted to board. Ship increased speed and took evasive manoeuvres. Later boats stopped chase and returned to mother ship.