Not much new under the sun: Offshore radar platform 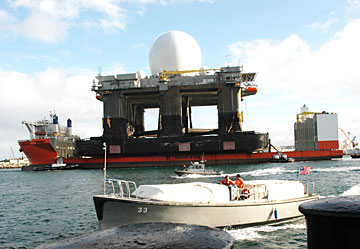 Part of the national defense against missile attacks from loony dictators living on the North Korean peninsula, here is an article and photograph of an offshore radar rig:

Longer than a football field, the Sea-Based X-Band Radar is a high-tech, fifth-generation semisubmersible oil-drilling platform that is self-propelled and can be positioned any place in the world.

Designed to be integrated into the military's Ballistic Missile Defense System, the radar platform is so sensitive that it can detect objects more than a continent away. 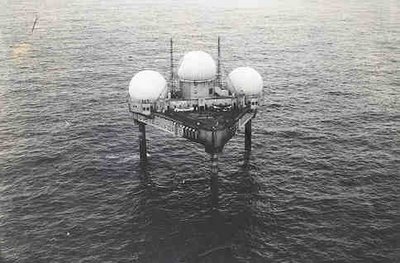 Not a new concept - back in the 1950's the US Air Force put radars on offshore platform known as "Texas Towers" in an effort at early warning against attack. See also here. Much more info on the Texas Towers here with many photos and the following map of the locations of the Towers. 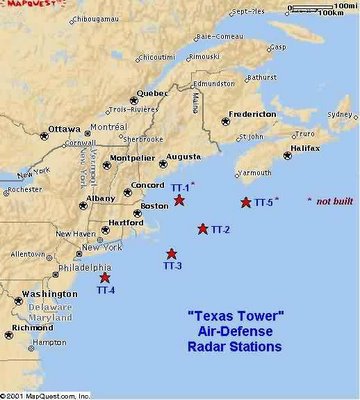 The X-band radar itself, which will sit on top of the floating platform, will be the largest, most sophisticated phased array, electro-mechanically steered X-band radar in the world. It will consist of thousands of antennae driven by transmit/receive (T/R) modules. T/R modules are multi-functional circuits that can transmit, receive, and amplify signals. In the X-band radar, they will provide the full fire control sensor functions for the Ground-Based Midcourse Defense system, including search, acquisition, tracking, discrimination, and kill assessment. The radar will be capable of distinguishing between objects as close as 15 centimeters.

After the radar has been mounted on the vessel, the entire structure will measure over 280 feet from the keel to the top of the radar’s dome, displacing 50,000 tons of water. To put this in perspective, SBX will be roughly the size of two football fields. A commercial C-band satellite will establish communications between the platform and shore facilities. It will take between 50 and 55 people on the platform and an addition 30 to 40 on shore to maintain the system.

Once operational, SBX will use its finely focused beam to track an incoming ballistic missile through space during the 20 or so minutes that it is outside the Earth’s atmosphere. The radar will transmit detailed tracking information to GMD’s command unit, which will calculate a fire mission and launch its Ground-Based Interceptor (GBI) missile. As the GBI streaks towards the threat, SBX will distinguish between warheads and decoys, ensuring the interceptor’s accuracy. The radar will continue to relay updated targeting information after GBI launches its Exoatmospheric Kill Vehicle (EKV), which will proceed on a collision-course trajectory toward the target. SBX will determine whether or not the EKV destroyed the warhead, and prepare to support a second launch if necessary.

The one drawback of SBX is that X-band radars, like all other radars, cannot see over the curvature of the earth, known as the “radar horizon.” SBX’s ability to detect incoming missiles (and discriminate between warheads and decoys) depends completely on where the radar is located in relation to the incoming missile. Thus, the closer to rouge nations and terrorist-sponsoring states that SBX is positioned, the better the odds that GMD will be able to complete a successful interception.