More on the Navy Riverines 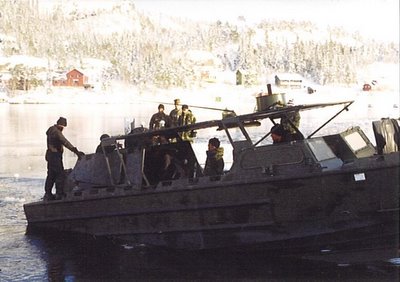 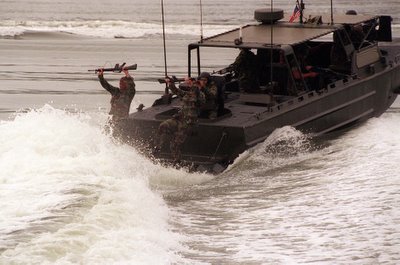 Marine Riverines attached to the 24th MEU conducted a river raid in late November near the village of Hard Duwaish, about 20 miles upriver from Fallujah, according to a Nov. 28 report in The New York Times. The Marine units were deployed earlier in November during the battle of Fallujah to cut off a possible escape route for insurgents after U.S. troops had encircled the city.

Though the need for fast-moving Riverines continues in Iraq, the Marines’ Small Craft Company was disbanded as a result of “resource constraints” since Johnson’s last tour, he said.

Navy Riverine units played a large role in the Vietnam War. The Navy’s nascent effort to re-create a Riverine capability remains in the concept and development phase, but it plans a force far larger than the 100 Marines deployed to Iraq. The Navy’s initial plan is to build three 12-boat squadrons with a total of about 700 sailors. A portion of that force will patrol the Euphrates and Tigris corridors.

These high-profile units will be part of the new Navy Expeditionary Combat Command (NECC) that will include the Seabees, explosive ordnance demolition units, the Naval Expeditionary Logistics Support Force and Navy prison guards at Guantanamo Bay, Cuba.

Vice Adm. Albert T. Church, then-director of the Navy Staff, said in July that the Riverines are part of a larger Navy effort to take some of the strain off heavily taxed Marine and Army expeditionary forces. The Navy will take over some transport duties in Iraq, for example, and relieve Marines stationed in Djibouti and Cuba.

Rear Adm. Donald K. Bullard, commander of the NECC, said that while the Riverines will prove critical to coalition control of Iraq’s waterways, they will be in demand in other theaters as well. In places such as Africa and South America — as well as Iraq — the Riverines will be a tool for helping partners in the war on terrorism, he said, exercising with and learning from many nations that do not have, or want, a blue-water navy.

“Many other countries only have a very small navy that is coastal,” Bullard said. “For us to get in and train in areas of security interdiction, customs and law enforcement means we increase their efforts in the war on terrorism.”

...Adm. Mike Mullen, chief of naval operations, told an audience at the Naval War College in August that the Navy “is missing a great opportunity to influence events by not having a Riverine force” that can push the front lines of battle as far forward as possible.

“A naval force floating off the continental shelf with no impact onshore is not decisive,” he said. “Think of the vast areas of the world covered by shallow water — those connected to the oceans by rivers and harbors and rugged shorelines. These are the decisive strips of sea that make all the difference, and we need to be there,” Mullen said, noting that nearly 30 percent of the North Persian Gulf is inaccessible by ships with drafts of more than 20 feet.

ADM Mullen gets it.

Photos of USMC Riverine Asault Craft from here. A reminder of US Navy river operations in our Civil War - the USS Cairo 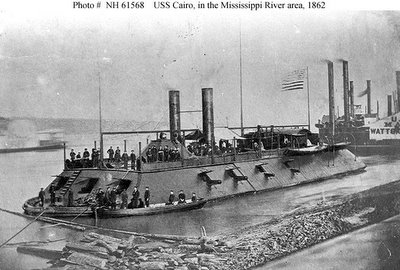 (photo source). Cairo was sunk by a mine, but the Union Navy won the river battles eventually- 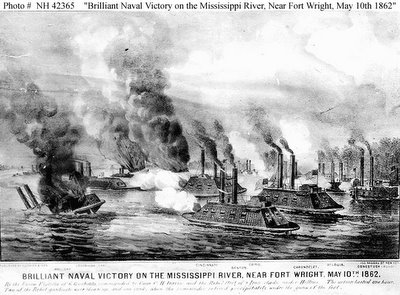