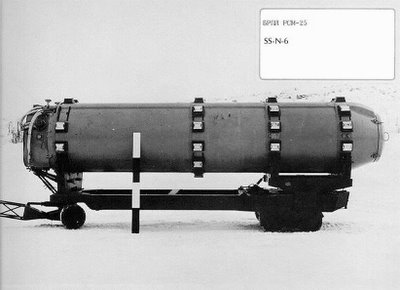 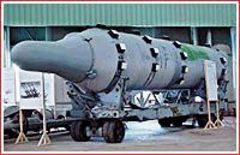 Reader Timothy Thompson, who is always able to provide keen insight into weapons systems, comments on the missile purchase:

Earlier reports had Iran apparently experimenting with Scud and/or cruise missiles on freighters. Info on the SS-N-6 (on which the BM-25 is based) here:

The SS-N-6 was an intermediate-range, submarine-launched, liquid propellant ballistic missile. It represented a considerable leap forward in the Soviet Submarine-Launched Ballistic Missile (SLBM), incorporating a second-stage engine, vastly superior range and accuracy, and Multiple Re-entry Vehicles (MRV). It used storable liquid propellants with a pre-launch time of roughly 10 minutes and a missile that could be launched from a submarine with an interval of 8 seconds between launches. It used an inertial guidance system.

On the same Missile Threat page is a report from August 2004 of North Korea deploying a "ship-launch" capable variation of the SS-N-6:

Jane’s Defense Weekly reports that North Korea is deploying two different forms of a new missile system, with capabilities to strike both U.S military forces in Guam and Japan and also the continental United States. The new missile is believed to be based primarily upon the Russian R-27/SS-N-6 submarine launched missile, as well as some SS-N-5 technology and assistance from the Russian missile manufacturer VP Makeyev Design Bureau. The land-based mobile version of the missile has an estimated range of missile 2,500-4,000 km, and the submarine- or ship-based version some 2,500 or more.
Besides the indication of Russian proliferation, the significance of such a ship-launched missile to North Korea is the very scenario so often discussed here on Missilethreat.com: a ship-launched ballistic missile attack upon the United States. Defense Secretary Rumsfeld spoke of such a threat in October 2001, and Assistant Secretary of Defense Wolfowitz has since warned of the same. Such a prospect points to the need for a much more robust missile defense architecture, which includes space based systems. The long range midcourse interceptors to be deployed in Alaska and California would not have sufficient time to meet and destroy such a missile. A space based laser, reacting at the speed of light, is one serious alternative.

The Claremont Institute's MissileThreat web site even has a movie of a ship-based launched attack on Hollywood here big file, smaller versions available here (among other things).