Terrorism from the Sea: Mumbai terrorists use hijacked ship to make India landing 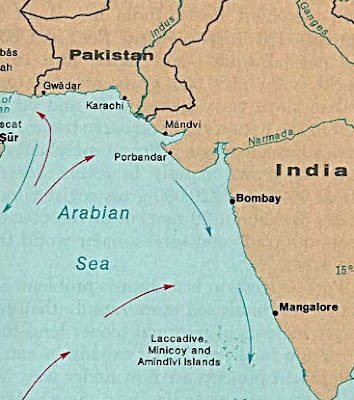 The Mumbai terrorists hijacked a ship at sea in order to make their approach to India, according to this report:

On November 18, the Research and Analysis Wing (RAW) intercepted a satellite phone conversation, in which a so-far unidentified caller notified his handlers that he was heading for Mumbai along with a certain cargo.

RAW analysts, however, rapidly determined that the apparently innocuous call was made to a Lahore phone number known to be used by the Lashkar-e-Taiba’s main military commander for operations targeting India, who is known only by the code-names ‘Muzammil’ and ‘Abu Hurrera.’

Mumbai Police investigators have determined that the call was made from a satellite phone that was eventually found abandoned on the Porbandar-based fishing boat Kuber, hijacked by the terrorists mid-ocean, most likely on November 19. The satellite phone also contains records of several other calls to Lashkar handlers in Pakistan.

Government sources said the RAW warning sparked a full-scale hunt for the merchant ship on which the terrorists had sailed from Karachi. The hunt was led by the Indian Navy and the Coast Guard. India’s coastal defence forces used global positioning system coordinates from the intercepted call to locate the general area in which the ship was located.

Based on the testimony of arrested Lashkar terrorist Ajmal Amir Kamal, investigators believe the terrorists hijacked the Kuber in order to avoid detection after they saw Indian patrols closing in on the area. Kamal, the sources said, has told investigators that some of the terrorists tied red ceremonial threads on their wrists to appear like Indian fishermen.
***
Meanwhile, Mumbai Police sources said, the continuing interrogation of arrested Lashkar terrorist Ajmal Amir Kamal had allowed them to put together a coherent account of the mechanics of the assault.

Kamal has claimed that the Lashkar assault team, which trained in boat-handling tactics at the Mangla Dam reservoir on the border between Pakistan’s Punjab province and Pakistan-administered Kashmir, was trained to locate their targets on a high-resolution satellite map.
***

Report on the sad fate of the fishing boat crew here:

The bodies of five fishermen suspected to be crew members of fishing trawler 'Kuber' that was hijacked by militants involved in Mumbai attacks have been found, officials sources said here.

The militants killed four members of the crew and threw their bodies into the water soon after taking control of the vehicle but kept the captain alive so that he could help them in navigation until reaching Mumbai's shores where they slit his throat, the sources said. "The officials have recovered four bodies of fishermen suspected to be crew of 'Kuber' from high seas, while the body of its captain was found hand from the boat seized by Mumbai Coast Guard," they added.

The captain's hands were tied behind his back. "Terrorists departed from some locations in Pakistan by vessel 'M V Alpha'. We don't know the exact locations from where they started their journey from that country but the route of the trawler started from Pakistan," Customs officials involved in the investigations said.

To avoid the possibility of being caught by Indian marine security agencies, the terrorist hijacked the fishing trawler 'Kuber' probably near Jakhau, and instructed the Captain to cruise towards Mumbai, they added.

The four onboard crew members of 'Kuber' were killed on way and thrown into water, the custom officials said. The fishing trawler owned by one Hiralal Masani and his brother Vinod Masani, had sailed from Porbander for fishing expidition on November 14, though the departure time of 'Kuber' in custom records was registred as November 13, the officials said.