“We have countries that give us information about the ships in the sea, if there are commercial ships sailing our way,” he told the Arabic newspaper.

Asked how the pirates followed these ships, he replied that they had “collaborators” who provided information on vessel movements.

“We have radars and know every ship’s location,” he added.

UPDATE: Speaking of watching ships, the Germans are using a P-3 aircraft to keep an eye on pirates, as set out here:

"Over the past two months we have been able to film four pirate attacks on merchant ships," says Commander Michael Potthoff (42), who commands the 65-men German Orion contingent in Djibouti. "Eight attacks were prevented because of our presence." 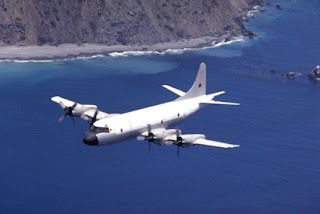 According to the naval officer, the onboard radar equipment can "detect a soccer ball at a distance of 20 km. Ships that carry ladders are suspicious for us. After all, fishermen do not need ladders. It is also suspicious when many people are on deck of a small boat and disappear quickly as soon as we turn up."