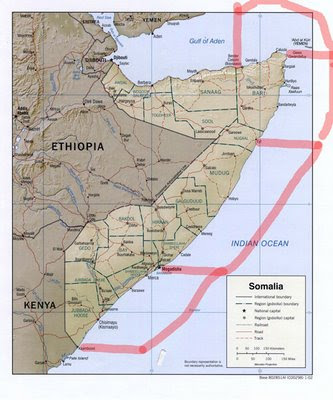 Pirates off the coast of Somalia have seized a Chinese fishing boat and 24 crew including Vietnamese, Philippine and Japanese citizens, Chinese state media reported on Friday. The Chinese vessel was held off the coast of the southern Somali port of Kismanyu late Thursday, the government's official Xinhua news agency reported from Mogadishu, the Somali capital.

The agency quoted an unidentified pirate leader as saying on the local Shabelle radio station in Mogadishu that the 24 crew were all "fine."

The pirate leader claimed that he seized the vessel 30 miles (48.2 kilometres) off Kismanyu because it was fishing in Somali territorial waters and said the crew would be "put before the law and punished accordingly."

But the agency quoted a source with the Chinese Ministry of Transport as saying the ship, the Tianyu No 8, was fishing off the Kenyan coast when it was seized.

The pirates had forced the crew to sail towards the coast of southern Somalia, the Chinese source said.

The ship is owned by the Tianjin Ocean Fishing Company and carried a crew of 15 Chinese, four Vietnamese, three Philippine, one Japanese and one Taiwanese.

Some Somali pirates have long claimed to be acting as a de facto coast guard to protect Somali fishing grounds, as noted in previous posts...see here and here and links therein.

China is invited to send ships to protect their fishing fleet. . .in international waters . . .
Map is my crude attempt at drawing Somali 200 mile Exclusive Economic Zone waters based on UNCLOS:

On the other hand, most of the outrageous claims of Somali pirates that they are "not really pirates," such as those made here, need to be taken as the load of rubbish they are, especially when the assertion is followed by a threat to go into foreign waters to protect your pirate lifesytle:

While admitting that the influx of foreign navies is making his life more dangerous, he remains defiant: "We will keep carrying out attacks. We are ready for long distance attacks as far as the coast of Yemen."