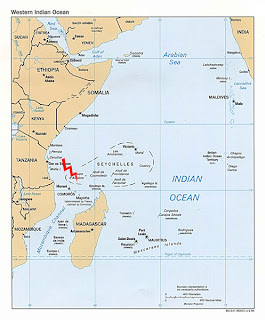 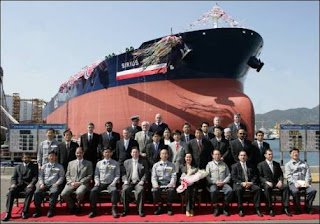 Pirates on Monday attacked and took control of the Saudi-owned very large crude carrier Sirius Star off the east coast of Africa, a spokesman for the US Navy 5th fleet said.

"The vessel is under the pirates' control," the spokesman told AFP following a statement saying that the tanker, which is owned by Saudi Aramco, came under attack more than 450 nautical miles southeast of Mombasa, Kenya.

The 318,000-tonne vessel, launched earlier this year, is flagged in Liberia and operated by Vela International.

Photo is from the ship-naming ceremony last year.

UPDATE: According to this report, the ship was not bound through the Gulf of Aden but was headed around the Cape of Good Hope and was nabbed 450 miles off the coast of Kenya. These are somewhat remarkable developments, as is the capture of such a large vessel.

The very large crude tanker Sirius Star was attacked more than 450 nautical miles southeast of Mombasa, Kenya. The ship is flagged in Liberia, owned by the Saudi Arabian based Saudi Aramco, and operated by Vela International. The crew of 25 includes citizens of: Croatia, Great Britain, The Philippines, Poland, and Saudi Arabia.

This attack comes amid a decrease in the rate of successful pirate attacks on merchant vessels off the coast of Somalia. Combined Maritime Forces (CMF) data analysis has shown that the combination of both military and civilian involvement in the area has reduced the percentage of successful piracy attacks from 53% in August, to 31% in October.

“Our presence in the region is helping deter and disrupt criminal attacks off the Somali coast, but the situation with the Sirius Star clearly indicates the pirates’ ability to adapt their tactics and methods of attack” said Vice Adm. Bill Gortney, Commander, Combined Maritime Forces. “Piracy is an international crime that threatens global commerce. Shipping companies have to understand that naval forces can not be everywhere. Self protection measures are the best way to protect their vessels, their crews, and their cargo.”
***
As is evident with the attack on Sirius Star, increasingly daring attacks are being conducted by Somali pirates on a variety of merchant vessels. Tuesday, Nov. 11, a UK warship successfully thwarted a pirate attack on a Danish shipping vessel and boarded the pirate ship responsible. During the course of the boarding, the team engaged the pirates in self defense resulting in a number of fatalities. Such incidents highlight the complications associated with operating in this environment and the need for a permanent and effective land-based solution to the security situation in the region. 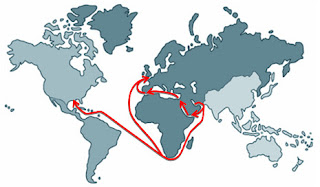 Rough area of attack is shaded pink - near the entrance to another sea chokepoint, the Mozambique Channel (click on images to enlarge): 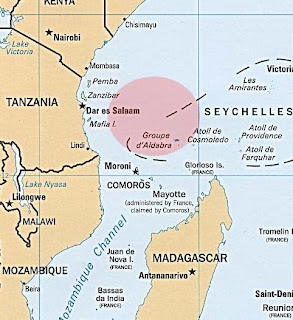 The top US military officer said Monday he was "stunned" by the reach of the Somali pirates who seized a Saudi supertanker off the east coast of Africa, calling piracy a growing problem that needs to be addressed.

But Admiral Michael Mullen, the chairman of the Joint Chiefs of Staff, said there were limits to what the world's navies could do once a ship has been captured because national governments often preferred to pay pirates ransom.

"I'm stunned by the range of it, less so than I am the size," Mullen said of the seizure of the Sirius Star Sunday by armed men.

The huge, oil laden prize, which is three times the size of a US aircraft carrier, was some 450 miles east of Kenya when it was boarded, he said.

That is the farthest out at sea that a ship has been seized in the latest surge of piracies, according to Mullen.

The pirates, he said, are "very good at what they do. They're very well armed. Tactically, they are very good."

"And so, once they get to a point where they can board, it becomes very difficult to get them off, because, clearly, now they hold hostages.

"The question then becomes, well, what do you do about the hostages? And that's where the standoff is.

"That's a national question to ask based on the flag of the vessel. And the countries by and large have been paying the ransom that the pirates have asked," he said.