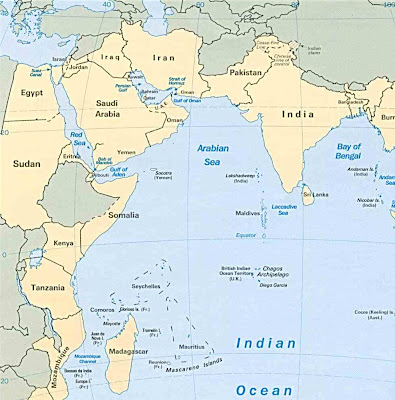 The current series of pirate attacks is just a small indication of the growing disorder in this part of the world, to which India cannot be a silent witness. The sad feature of all this, is the absence of any maritime leadership to control the situation with force, firmness and speed. The multi-lateral mechanism to achieve this aim is traditionally the UN and India’s delayed participation in the Somalia patrol is on account of the hoary old MEA (NB E1: India's Ministry of External Affairs) belief that all initiatives in the world must come from the UN — a body not known for reacting fast enough to prevent tragedy the world over.
***
As usual the pirates have actually sought sympathy by making excuses, such as we can’t help it, we have no other means of income or, we want only money, we won’t sell any military cargoes, or even worse we are protesting by being pirates since the world neglects us. These protests are clearly ridiculous, because the whole area is just as poor, but only Somalia resorts to piracy. The pirate attacks began almost four years ago, but increased in intensity when the world 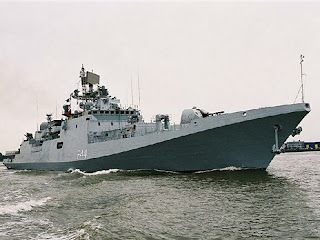 failed to respond and pirates began to get away with huge amounts of ransom money. The ‘high life’ that the pirates lived attracted the envy of all the young, unemployed youth into becoming pirates too. . .
***
This is a ridiculous situation, as the ROE (Rules of Engagement) of the NATO ships worries more about the human rights of the pirates, than about stamping out piracy. Actually there is an 1838 convention that permits any warship to interfere anywhere on the ‘High Seas’ to intercept pirates and try them — without handing them over to the country of origin. Today’s interpretation by human rights lawyers state that pirates cannot even be handed over to their own state if that state does not respect the human rights of the pirates. This is an absurd situation. . . .The answer appears to lie in New Delhi, where the MEA needs to draw up its own coalition of Indian Ocean powers, under the Indian navy to stamp out the pirates, in their harbours, ruthlessly

UPDATE: Strategy Page sees the Russians as willing to go "old school" on the Somali pirates:

If the Russians go old school on the Somali pirates, it will probably work. The Somalis are vicious and clever, but not stupid. Somalis and Russians speak the same language of violence, and the Russians carry a bigger stick. The world will complain, then enjoy the benefits of a piracy free Somali coast.

And the probable deaths of a few hostages? Collateral damage?

Piracy, of course, is hardly the only form of barbarism at work today: There are the suicide bombers on Israeli buses, the stonings of Iranian women, and so on. But piracy is certainly the most primordial of them, and our collective inability to deal with it says much about how far we've regressed in the pursuit of what is mistakenly thought of as a more humane policy. A society that erases the memory of how it overcame barbarism in the past inevitably loses sight of the meaning of civilization, and the means of sustaining it.

UPDATE3: As I meant to add before my power went out - I am not in agreement with Strategy Page. Such brute force as they project may work in a short term operation. But the Russians and their special forces are not going to hang around forever off Somalia and they will not make the effort to go after the real power behind the pirates. As with most intelligent insurgent forces, the pirates may withdraw from the coasts temporarily, wait for the navies of the world to go home (which they will do) and then start up again.

As I have said before, the solution to the Somali pirate problem can be contained from the sea, but solved only on the land. Even killing every man found in some Somali pirate port will not change that equation, though it would bring universal condemnation, which even the Russians would have to listen to. A hammer is a useful tool, but it is not right for every job.

That is not to say that captured pirates should not be harshly treated, or as France as done, sent off for trial. As was noted in the comments to a post about when the Danes let 10 pirates go, some nations have their own reasons for not wanting such trials on their lands. The international law is pretty clear, though:

Note that the Somali pirates are pretty clever in making sure they take their captured ships into Somali waters and off the high seas.
Posted by Mark Tempest at 11/25/2008 06:11:00 AM