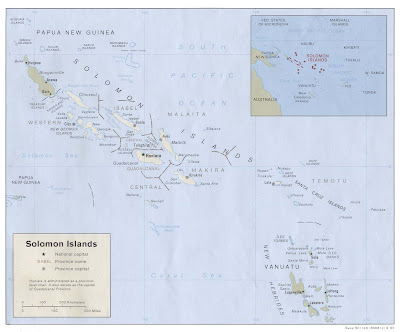 As Americans end their Thanksgiving weekend, filled with news stories of economic gloom and doom and terror troubles around the world in India and other places, while there is good news from Iraq, it is a good time to remember past troubles and know that they were overcome with patience and hard work.

As it happens, November 30 is the 66th anniversary of the The Battle of Tassafaronga. "The battle of what?," you might ask.

Let's set the scene. It was about almost a year after the Pearl Harbor attack. The Americans, recovering from a severe economic depression were building ships, airplanes, tanks and armies. With their allies, they were on the move in the Pacific, seeking to throw back the Japanese threat to Australia, the key to defending the Pacific. The first American forces arrived in Australia in April. In May the Japanese fleet is defeated at the Battle of Coral Sea. In June, the Battle of Midway sealed the fate of the Japanese Navy and halted any idea of further Japanese expansion of their defensive perimeter. In August U.S. Marines landed at Guadalcanal in the Solomon Islands beginning a 6 month long fight for the island and its important airfield. The Marines hang on to the island by sheer will power. The allied navy is getting frequently pounded by the Japanese fleet off Guadalcanal:

August 8/9 - A major U.S. naval disaster off Savo Island, north of Guadalcanal, as eight Japanese warships wage a night attack and sink three U.S. heavy cruisers, an Australian cruiser, and one U.S. destroyer, all in less than an hour. Another U.S. cruiser and two destroyers are damaged. Over 1,500 Allied crewmen are lost.

The allies try to stop the flow of men and supplies to Japanese forces on Guadalcanal, the Japanese set up the "Tokyo Express" to get supplies ashore. In October, the Battle of Cape Esperance results in an allied victory and Army infantry lands on Guadalcanal to reinforce the Marines. But the Japanese fought on. Then, in November there was the great sea Battle of Guadalcanal (November 11-15 - a Japanese effort to land a large number of troops to reinforce Guadalcanal and consisting of several days of hard fought action resulting in the loss of a large number of U.S. ships and the abandonment of Japanese plans to take back Guadalcanal) which was followed by a lull:

For some time after the Battle of Guadalcanal, the Japanese appeared to have abandoned their troops to slow but inevitable extinction. The unfailing indicator of their intentions--the amount of shipping in the Buin-Faisi area--fell rapidly after the middle of November, and remained low for a week or 10 days.

On the 24th, however, Japanese shipping concentrations began to grow. Three days later the number of vessels in Buin and Shortland harbors was reported to have mounted from a mere dozen the previous week to 25-30, in addition to small craft. An enemy move in force to supply and reinforce his southern Solomons positions seemed imminent. If American troops were to continue their successes, this attempt had to be balked.

Our victory at the Battle of Guadalcanal, though overwhelming, had cost us 18 ships sunk or so badly damaged that extensive repairs were required. With the exception of destroyers, COMSOPAC's only available surface units were the carrier Enterprise, the battleship Washington, and the light cruiser San Diego at Noumea and the heavy cruisers Northampton and Pensacola at Espiritu Santo.

Several other ships were, however, en route to the South Pacific. By 25 November, as the enemy's aggressive plans became evident, we had assembled a force adequate to counter the expected offensive. At Nandi in the Fijis lay the carrier Saratoga, the battleships North Carolina, Colorado, and Maryland, and the light cruiser San Juan. The heavy cruisers New Orleans, Northampton, and Pensacola, and the light cruiser Honolulu were stationed at Espiritu Santo. These last two, together with the heavy cruiser Minneapolis which arrived on the 27th, had come from Pearl Harbor. Here also on the 27th were the destroyers Drayton (which had accompanied the Minneapolis), Fletcher, Maury, and Perkins.

What happened next is one of those cautionary tales about first reports, responsibility and a certain amount technical deficiency of the U.S. Navy.

The orders to sail was given. Late on the 30th, the both forces arrived off Guadalcanal. At the last minute, the admiral in charge of the force was replaced. American destroyers, with torpedoes inferior to those of the Japanese destroyers, were not given authority to unleash their weapons on first detection of an enemy force. When, in fact, the destroyer Fletcher first had radar contact with the enemy force of 8 destroyers was delayed in firing torpedoes while waiting for permission. Further, the Japanese used "flashless powder" which allowed them to shoot without revealing their position while the U.S. ships shot with powder that revealed their position and allowed the Japanese to more easily target the U.S. ships. The Japanese torpedoes were superior in range and in having good detonators. Six of the Japanese destroyers were burdened with deck cargo:

Japanese armed forces on Guadalcanal were short on everything. (1) They had no more than five artillery pieces, and could not afford to fire more than ten rounds a day (the less, the better), for fears of being left without ammunition to repulse attacks or support counter-attacks.

Japan's only ships capable of lifting large boxes of ammunition or large weapons were the fast seaplane tenders Chitose, Chiyoda and Nisshin, all of which were capable of around 28 knots - a necessity to avoid being counter-attacked by Henderson-based planes during the voyage back up the Slot (and of course, the voyage down).

But food, it was determined, was possible to be carried by destroyers, if indigenious methods could be devised. They were.

In the future, destroyers would carry drums formerly housing oil, gasoline, and whatever could be shipped in drums. These would be filled with foodstuffs and medicine and whatever else would be needed, though enough air would be left to leave the drums afloat. They would be made watertight, chained together, and simply dropped overboard by destroyers stopping off the friendly shore. Then, the chain or tow would be brought on land by ship's boat, the drums would be towed on land, there opened by Japanese soldiers, dinner would be held and finally, the re-strengthened Army troops would sweep away the U.S. forces in an offensive set tentatively for 22nd January 1943.

The first lift of these drums would be provided by the most outstanding destroyer leader the Japanese had, Rear-Admiral Tanaka Raizo, taking eight destroyers, six with some 440 drums total, from Japan's Shortland forward base to a point off Tassafaronga, beginning his voyage on November 30, arriving by midnight 30th, early hours 31st.

For the garrison on Guadalcanal, such shipments of drums, if maintained at a rate of two every three days, could mean sustained rations. It could not build up reserves, and it could not by any means ship ammunitions, being too heavy to be moved in floating drums in any significant amounts. 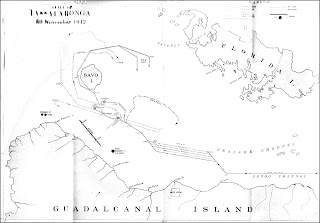 Here's how the battle played out:

Radar aboard the flagship detected the convoy at eleven miles and the US task force turned to parallel the enemy. The Japanese sailed close to the coast where they could not be detected by several of the DD radars and out of effective torpedo range. While commanders discussed the situation, the convoy passed its closest point of approach and twenty torpedoes were finally fired as the distance lengthened. Star shells were fired before the torpedoes completed their runs. The Japanese replied with a barrage of their excellent, long range and accurate torpedoes at the American gun flashes. The scout destroyer reversed course firing incessantly, drawing the concentrated fire of the American ships while the convoy delivered their supplies, reversed course and launched a second salvo of torpedoes. Four cruisers took six torpedo hits and the remaining seven Japanese destroyers made good their escape. Heavy cruiser Northampton sank while Minneapolis, New Orleans, and Pensacola were badly damaged. Only the light cruiser, Honolulu, and the six destroyers escaped damage.

In the Tassafaronga action on the night of 30 November 1942, Task Force WILLIAM opposed the first important Japanese attempt to reinforce Guadalcanal after the decisive engagements of mid-November. The battle opened auspiciously. Task Force WILLIAM apparently possessed the initial advantage of surprise. This it implemented by excellent gunnery, which, so far as CINCPAC could determine, resulted in the sinking of the Takanami and three other Japanese destroyers and the damaging of two or more others.26 On the other hand, not a single enemy shell struck any of our ships.

This repulse of the Japanese, however, was only achieved at severe cost to the United States Navy. During the second phase of the battle, the enemy launched an amazingly effective and devastating torpedo attack

Here, with the benefit of time, is a better description:

Under orders to intercept an enemy forece off Guadalcanal, a U.S. cruiser-destroyer task force moving on a northwesterly course off Tassafaronga (midway between Savo Island and Cape Esperance) encountered an enemy force of eight destroyers heading southwest on almost a parallel course. At 2320 hours American destroyers launched their torpedoes followed minutes later by gunfire from the cruisers. The Japanese responded with a massive torpedo attack. By midnight all firing ceased. 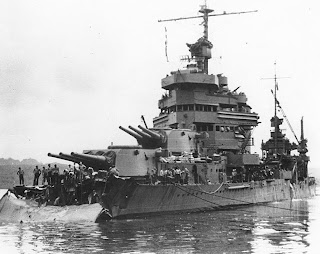 While all four of the U.S heavy cruisers were critically damaged, one of which sank the following day, neither the one light cruiser nor any of the six American destroyers were hit. The Japanese lost one destroyer sunk. None of the others was damaged. The Battle of Tassafaronga was a serious defeat for the Americans. Nevertheless, the damage control parties of the crippled U.S. cruisers merit the highest praise. All but the hardest hit cruiser were saved.

After action reviews caused changes to be made in destroyer tactics and with continued air and Naval support, Guadalcanal was held, paving the way for the island hoppi 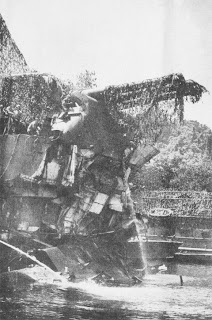 ng campaign that ultimately resulted in victory. The U.S. learned not to underestimate the Japanese torpedo technology and learned to use radar more effectively.

From a defeat...victory. And give a salute to the crews of the three heavily damaged cruisers that kept the sea out of their ships, allowing them to be repaired and brought back to fight another day.

As you might see from this picture of the bowless Minneapolis on her way to Pearl Harbor for further repair: