Someone at the UN Satellite office went a lot of trouble to produce the pretty picture shown below (click on it to make it bigger). It comes from here (pdf). 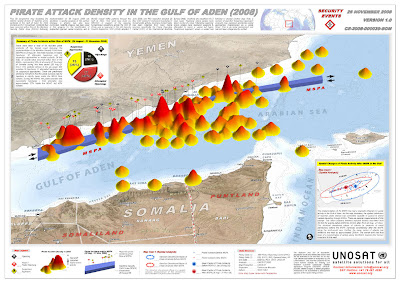 This 3D perspective map illustrates the relative spatial density of reported pirate incidents in the Gulf of Aden for 2008 (current as of 21 November). Incidents that have occurred within 5km of the Maritime Security Patrol Area (MSPA) following implementation on 26 August 2008 are identified. A spatial analysis of the pattern changes in attacks has also been conducted. Satellite imagery has been used in this analysis for the identification of suspected hijacked vessel locations, and to identify vessel traffic patterns through the Gulf of Aden. This work was done by UNOSAT in support of the ongoing humanitarian operations across the Horn of Africa, and in response to the UN Security Council Resolution 1816 (2008) adopted 2 June 2008, and IMO resolution adopted 29 Nov. 2007 calling for continued monitoring of Somali pirate activity. All piracy incident data has been obtained from open media sources, specifically the Piracy Reporting Center (PRC) of the International Maritime Bureau (IMB). Incidents are classified into 3 main types: ´Hijacking´ where pirates have taken control of a ship; ´Attempted Hijacking´ where pirates have deployed weapons & attempted to board a vessel but failed; ´Suspicious Approach´ where a vessel has followed or chased another ship; Note, a number of reported ´Suspicious Approach´ incidents may represent accidental vessel approaches misperceived as a pirate threat. This is an initial assessment and has not been independently verified.

UPDATE: My comment - If ship traffic moved its routing to be in or closer to the Maritime Security Patrol Area, you would expect that the pirates would have to move into or closer to the MSPA in order to find targets for their operations. In other words, if the ship tracks moved north, away from the Somali coast, I would expect the pirates to move north along with the traffic, just like fishermen move to where the fish are biting.
UPDATE2: Further, I would think the major shipping route from the strait at Bab El Mandeb would tend toward hugging the coast of Yemen anyway, as that provides the shorter route to, say, the Strait of Hormuz. "That's where the ships are."
UPDATE3: The UN map contains an inset which is of interest because it show the narrowing of the pirate attack areas as set out in its caption: 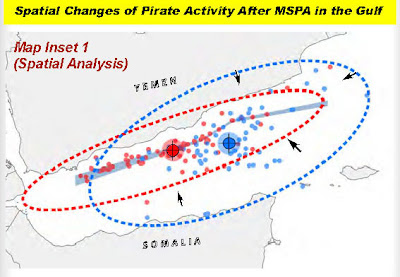 The implementation of the MSPA has had a dramatic influence on pirate activity in the Gulf of Aden. As this map illustrates, the spatial distribution of reported pirate attacks has contracted spatially in pursuit of transit vessels travelling through MSPA. There are several measurements of this change. The mean distance between reported attacks has fallen from 30.5km for events before MSPA to 24.6km after (from 26 Aug. -21 Nov). The standard deviational ellipse of attacks (a measure of event distribution) before the MSPA narrowed considerably after the MSPA along the north-south axis. Further, the mean center of attacks has shifted to the west by approximately 200km. The overall shift has thus been of a concentration of activity along the MSPA, towards the Yemeni coast and to the west.

I've captured the 2007 and 2006 piracy info from the same area as seen above. Not much info but make of it what you can: 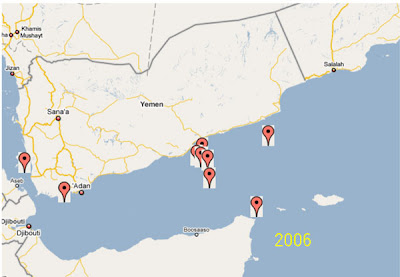 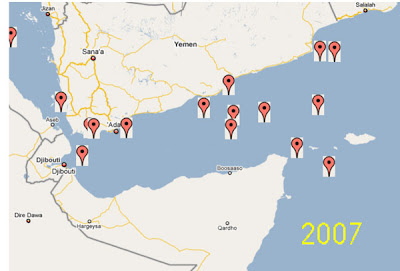 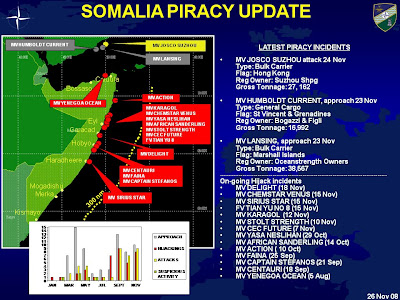 There appears to be a lull in piracy activity: no new hijackings have been reported/can be confirmed since MV DELIGHT 18 Nov. Recent press reporting of Yemeni vessel hijacked [NB E1- see here] cannot be confirmed by independent sources and is being investigated. Most recent confirmed incidents were 2 approaches and one attack, all of which occurred in the Gulf of Aden during 23-24 Nov (As shown on slide) On 18 Nov Thai FV EKWATANAVA 5 was engaged and sunk by Indian Naval vessel TABAR. At the time of the engagement EKWATANAVA5 was under the control of pirates who probably intended to use her as a mother ship. 14 vessels remain hijacked comprising 12 merchant ships 1 fishing vessel and tug boat Yenegoa Ocean.
The current slide displays last known position of hijacked vessels.

The total number of commercial vessels (including one tug)hijacked in Somali waters now stands at 14; over 200 merchant seamen are held by pirates. The use of mother-ships seems to be on the rise, and potentially, vessels are hijacked with the sole intention of using them as such.

In short, the trends in latest piracy incidents are as follows:

* Targeting larger cargo / oil / gas / chemical tankers
* Approaches / attacks conducted from 2-3 small speedboats with 3-5 armed persons each. The number of boats involved in each incident seems to be increasing.

Left off the NATO and UN lists is a report of a captured chemical tanker.

Finally, a screen capture of the "Live Piracy Map" available here, zoomed in for a closer look at Somalia and its surrounding waters, I added the red arrow and label to show where the Saudi VLCC was taken. You might note there have been other attacks in the same area. You might further consider that, while the Somali pirates historically have gone after ships with low freeboard (space between water and the first open deck), pirates in the Strait of Malacca have long been boarding vessels like tankers with higher freeboard. It's a matter of technique. 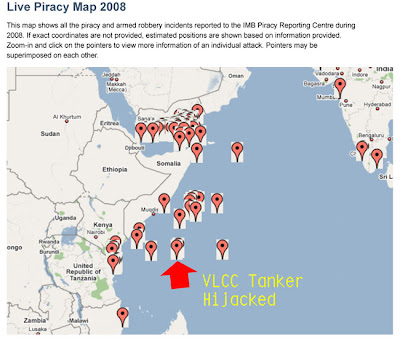