President Mahmoud Ahmadinejad said the Sajjil-2 missile used "advanced technology" and had "landed exactly" on the unspecified target.
***
He said the missile used solid fuel and was "able to go beyond the atmosphere then come back and hit its target".

Iran does not yet have the technical capability to produce an ICBM, but it is believed they
may develop one by 2015. Iran has continued research and development on its longer
range ballistic missile programs and has publicly reiterated its commitment to developing
SLVs, which contain most of the key building blocks for an ICBM. Iran launched its Safir
SLV on 17 August 2008 in a failed attempt to orbit its indigenously produced Omid satellite.
On 2 February 2009 Iran again launched a Safir SLV, successfully inserting the Omid satellite
into orbit. This success shows progress in some technologies relevant to ICBMs.
***
Iran has also indicated it has a solid-propellant MRBM in development, and it may seek to develop additional longer-range MRBMs and IRBMs. This includes a variant of the North Korean new IRBM which reportedly has been sold to Iran. (footnotes omitted)

An SLV is a Space Launch Vehicle. Apparently Iran is moving along on it "solid-propellant MRBM. 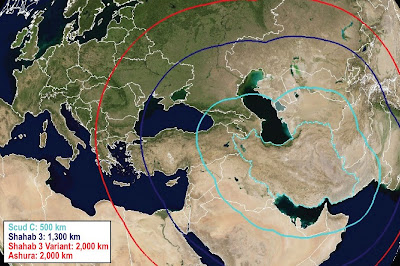 Since the Iranians assert the range of the Sajjil-2 is 2000 km, the red line gives you an idea on the range potential, not that Iranian leaders have ever vowed to wipe Russia, Ukraine, Bulgaria or Greece off the map. Israel is not impressed:

Israel said that the new missile test should also be a source of concern for European countries which would also now be in range.

"In terms of strategic importance, this new missile test doesn't change anything for us since the Iranians already tested a missile with a range of 1,500 kilometres (nearly 950 miles), but it should worry the Europeans," Deputy Foreign Minister Danny Ayalon said.

"The Iranians are also trying to develop a ballistic missile with a range of 10,000 kilometres (6,250 miles) that could reach the coast of the United States," Ayalon told public radio.

Blackmail by missile. Coming soon to a town near you.

Cutting defense budgets in missile defense? Have you called your Congresspersons?
Posted by Mark Tempest at 5/20/2009 08:13:00 AM