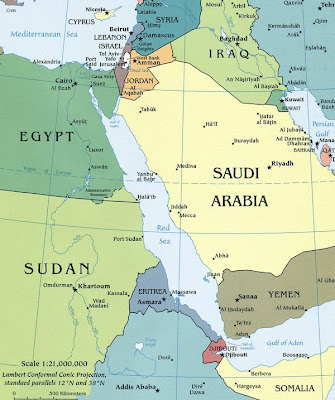 Here's an interesting situation from Jane over at Armies of Liberation: Yemeni Fishing Ship Blows Up in Sudanese Waters. The background is that a Yemeni newspaper asserts that a Yemeni fishing boat was destroyed by outside forces, as set out here:

Two Yemeni fishermen were killed and one was injured while the fate of a fourth one is still unknown after their boat came under an aggressive assault by one of the international naval ships patrolling the Red Sea near Sudan on Tuesday.

A source at the Coast Guard said Abdu Marwani and Muhammad Naj'e were killed immediately after their boat was totally destroyed by a missile which some suspect was an air strike.

Sources at Yemen's navy said it probably came from sea.

While the third fisherman made it to Sudanese coast and is now in critical condition.

The fishermen came from the Midy area, Hajjah before their boat was hit near Sudan's waters.

A coordinated investigation by Yemen and Sudan is underway to explore reasons for the attack.

He told the media the survivor is being investigated by Sudan.

Tuesday's attack comes in a series of attacks against Yemeni fishing boats by international forces patrolling the Red Sea and the Indian Ocean.

Jane notes there is a lively trade in smuggling diesel fuel from Yemen to Sudan and others have noted that some Yemenis have been arms merchants (see here and here).

Jane correctly points out that maintaining situational awareness is vital throughout the region:

The much bigger issue is the exploding fishing boat. Its unclear that any missile hit it at this point, its could have been laden with explosives and blew up accidentally. Its important for the international fleet to remain vigilant about the danger of maritime terror attacks in the Gulf of Aden.
***
The rules of engagement should not allow hapless lost Yemeni fishermen to approach military vessels...
A statement from al Qaeda Central called for naval jihad (April 2008?), the October one by a Yemeni forecast a major event around Somalia. The links between AQAP in Yemen and al Shabab go back to the ICU and before. Its a predictable scenario that AQAP would attempt to outdo the Cole bombing when the waters are full of such tempting targets...

It was not in Somali waters that the Cole was attacked, nor the oil tanker Limburg.

About a year ago, though, al Qaeda was yapping about Chokepoint Terrorism:

Finally, the article stresses that the seas off the coast of Yemen, namely the Gulf of Aden, the Bab Al-Mandeb strait and the Red Sea are of supreme strategic importance in the campaign to expel the enemy from key locations. If the enemy loses these key areas, it explains, "he will not be able to defend himself on land and [to protect] his naval bases from the mujahideens' attack."