A.P. Moller-Maersk is calling for creation of a secure maritime corridor off the coast of eastern Somalia to protect vessels against the surge in pirate attacks.

The Danish shipping line made the call as part of its ongoing investigation into the attempted hijacking of the Maersk Alabama and kidnapping of its skipper Richard Phillips, the Financial Times reported.

“We also call on the international community to establish a transit corridor so vessels can safely call at ports in Kenya and Tanzania,” he said.

Creation of a secure sea lane by allied navies would likely involve the use of air patrols far out at sea. Navies cannot deploy enough vessels to respond quickly to incidents in the Indian Ocean, but in the Gulf of Aden, helicopters can frequently reach the scene of an attack within 30 minutes, often in time to foil it.

But outside of the patrolled transit zone in the Gulf of Aden, ships are on their own. U.S. Coast Guard Rear Adm. (Ret.) Paul J. Pluta, who was responsible for safety and security before he retired, said the best way for the allied forces to protect this zone would be regular air patrols that could be mounted from Djibouti, from Mombasa in Kenya, or from the U.S. base at Diego Garcia in the Indian Ocean.

Not enough regular Navy ships to build up good patrols? I have some suggestions on how to assemble a 50-ship anti-piracy patrol in a hurry... here and here. They don't all have to be American . . .

UPDATE: A video of the attack on the MV Liberty Sun:
And a reminder of the story. The ship was, like the Maersk Alabama, delivering food aid for starving people in Africa, including Somalia. 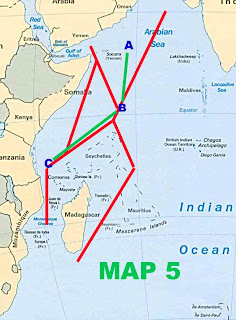 How to Beat the Somali Pirates: