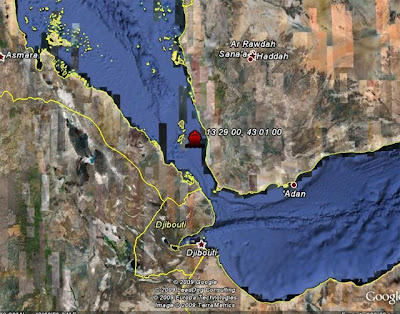 I have received an early report of an RPG and machine gun attack on a merchant ship in the Red Sea, north of the Bab El Mandeb chokepoint, after the ship dropped its escort vessels. The attack reportedly took place about 8-9 hours ago.

As far as I know, this is the first reported attack by possible pirates in this area.
(UPDATE: Correction - 3rd in area within 3 months -see UPDATE 4 below)
However, with monsoon weather possibly affecting the Gulf of Aden and waters off the east coast of Somalia, this might be another pirate adaptation. 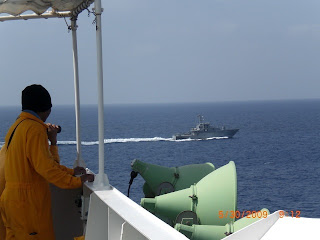 Just a heads up that ...[ship] was attacked this morning with RPG & automatic fire – the (pending)... [under] escort from Oman Border to the start of the supposed safe area of red sea at Bab El Mandeb – however this attack happened 50 miles North, after the (pending) had been released from the Navy escort.

Vessel has sustained damage to bridge and accommodation block but vessel conducted evasive manouevres and ... contacted Gulf of Aden Group Transits ...[contacted] Yemen Navy resulted in immediate deployment of multiple military vessels and helicopters searching for the Skiff with the 7 pirates onboard.

I owe a debt of gratitude to the Yemen Navy for immediately deploying all available assets in region from Aden, Hodeidah & Mokha

Photo of (pendng) under escort by Yemeni Navy provided by Gulf of Aden Group Transits, used by permission, all rights reserved.

Sounds like a harrowing time for the attacked ship, with good responses by all of the counter pirate forces including GOAGT which was providing guidance to the vessel, the Yemenis and the crew of the (pending)

UPDATE2: You might recall that (pending) was released by Somali pirates on (pending). 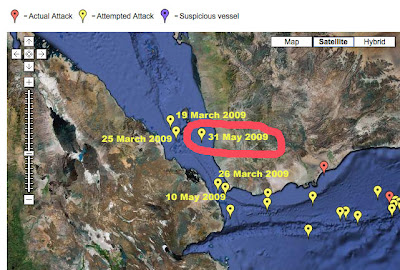 UPDATE6: A clarification- Fairplay reports earlier Red Sea attacks may not have involved weapons firing at vessels.
Posted by Mark Tempest at 5/31/2009 03:43:00 PM