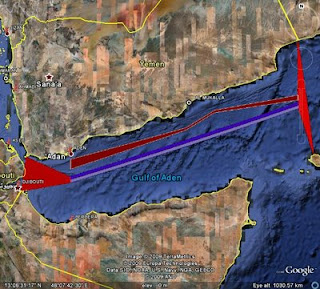 Originally begun by EU Naval Forces, the Gulf of Aden Group Transits (GOAGT) scheme is now the primary method for merchant vessels transiting the area to deter acts of piracy. GOA GT is endorsed by the general maritime community and supported by all navies involved in the regional counter piracy mission. This includes naval forces from the EU, US, Coalition Maritime Forces, NATO, China, Japan, Korea, and regional countries. Based on old anti-submarine tactics, the GOA Group Transit is simple. Pirate attacks rarely happen at night, thus merchant ships should transit “high risk” areas of the IRTC at night. Dawn and dusk are when most pirate attacks occur, thus that these “high risk” times are when naval warships should be present. Merchant ships are grouped by speed, with staggered starting points.This allows each group to transit the “high risk” areas at night, and allows the groups to reach the same point at the same time. Upon arrival at this point,at either dawn or dusk, the groups are protected by naval assets who have “sanitized” the area. As a result of the GOA GT, merchant ships transit “high risk” areas at night, and are protected by naval assets at the most “high risk”times. Additionally, the grouping of ships by speed allows close monitoring and quicker response by the nearest naval asset in case of emergency. Merchant activity in the corridor is separated, with westbound traffic to the north and Eastbound traffic to the south. Compared to convoys and escorts, the GOAGT is the most effective use of limited military assets to protect the maximum number of ships.

UPDATE: GOAGT is careful to point out, as a correction to the MARLO Newsletter item, that Military Security Centre (Horn of Africa) (MSC(HOA) "actually run the system." GOAGT states that it offers a different level of service than does MSC(HOA)... "the vessels that do register with us, GoAGT, get a bridge call every 3 hours and acknowledgement and threat assessment and pirate weather forecast for the trip."

The Gulf of Aden Group Transits website is here and is currently under construction.

MARLO Bahrain website is here. It offers up some useful advice if trying to avoid pirates:

* If the Master has exercised his right to turn off the Automatic Identification System (AIS), this should be turned on once the ship comes under pirate attack. * Sound emergency alarm and make ‘Pirate Attack’ PA announcement in accordance with the ship’s emergency plan. * Make ‘Mayday’ call on VHF Ch 16 (and backup Ch 08, which is monitored by naval units). Send a distress message via the DSC (Digital Selective Calling) system and Inmarsat-C as applicable * Maximize ship speed. In the Gulf of Aden, evidence to date from failed attacks is that the pirates will give up if unable to board within 30 45 minutes. If you can buy time until the military forces can arrive, this often leads the pirates to abort their attack. * Prevent skiffs from closing by altering course and increasing speed where possible. Pirates have great difficulty boarding a ship that is: o Making way at over 15 knots. o Maneuvering - Consider increasing the pirates’ exposure to wind/waves and using bow wave and stern wash to restrict pirate craft coming alongside. Aggressive maneuvering, such as small zigzagging, should be attempted when skiffs are close to ships side (within 10-20 meters). Try to keep pirate skiffs in the positive pressure zones and out of the negative pressure zone. After skiffs have hauled off, vessel should straighten up and try to regain speed. * Activate fire pump defensive measures. * Muster all remaining crew in defined safe muster area/citadel * DO NOT STOP.