He and his colleagues have hijacked nearly 30 vessels this year, meaning 2009 is on course to be even worse than last year, when pirates from the Horn of Africa nation seized 42 ships.

But the crime wave has prompted a hurried deployment in the region by foreign navies, thwarting several attacks -- and now the weather is turning too, making the seas rougher and the pirates' prey harder to hunt.

"My biggest fear is that the piracy business will have to stop. The weather will be terrible in the coming days and the warships have increased in number," Said told Reuters in Eyl.
***
But the last few weeks have not been so successful. He knows he was lucky to get off scot-free after being captured once.

"I recently went to sea ... but all of my last three attempts have been in vain. I was even caught by a Portuguese warship, but fortunately they released me and my friends."

Just in time for bad weather, another 200 pirates claim to have given up piracy, as set out here:

Around 200 Somali pirates are reported to have renounced piracy at a meeting in northern Somalia.

Members of the group met local leaders and Somali expatriates in Eyl, in the autonomous region of Puntland, and promised to halt their activities.

Pirate representative Abshir Abdullah told the BBC he urged other groups to free ships in return for amnesty.

I don't see amnesty forthcoming, unless the pirates surrender themselves along with the captured ships. And I suspect the pirate plan does not include the "former pirates" remaining in Somalia. The south of France, however, is nice...

Speaking of weather, the monsoon (see here) seems to be kicking up: 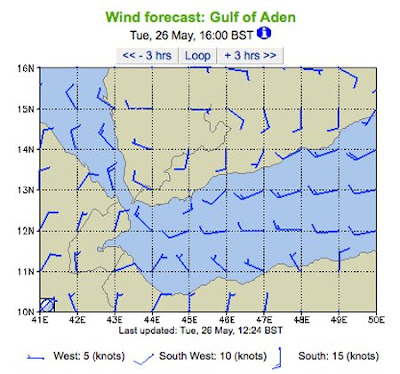 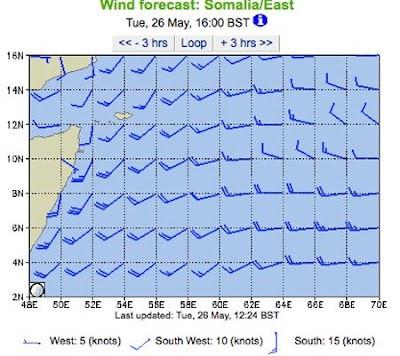 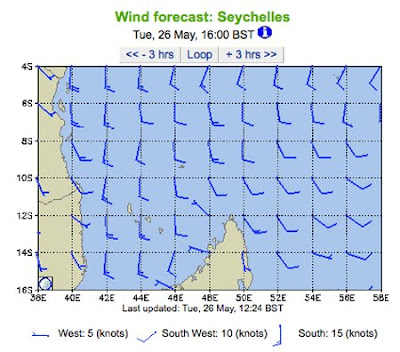 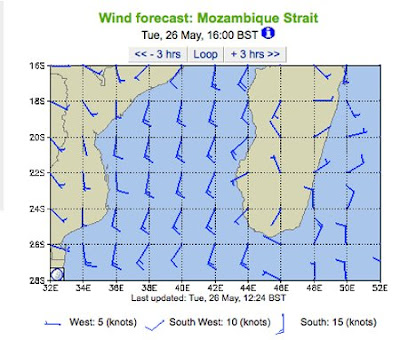 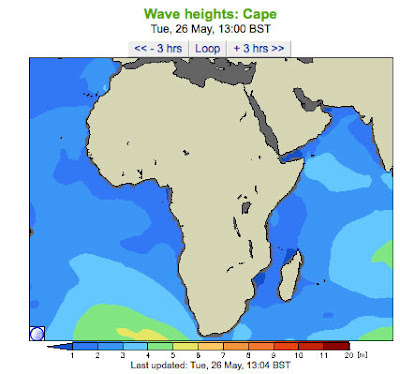 Higher winds, heavier seas - not much for a pirate in a small open boat to enjoy.

Expect, in addition to further promises of pirate reform, a couple of months of slowed pirate activity.

Iran has chosen this perod to send 6 (?) warships to the area to participate in international anti-pirate measures, as set out here:

Navy Commander Rear Admiral Habibollah Sayyari announced on Monday that Iran has sent 6 warships and logistic vessels to the Gulf of Aden and the surrounding international waters.

Sayyari, who made the remarks while visiting the development projects and installations of the Iranian Navy here in Tehran, described the measure as "unprecedented in the history of the Iranian Navy", and added, "This important move indicates the country's high military capability in confronting any kind of foreign threat along the coasts of the country."

Might be a slow deployment for the Iranians, since the pirates seem to be standing down for weather. Not that the effort isn't appreciated.

UPDATE: Having staked out a position for a slowdown, I now report two unsuccessful attacks in the Gulf of Aden, which I have tried to depict on the image nearby: 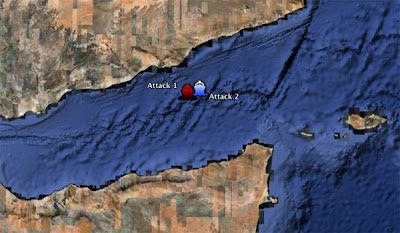 The ship is safe now.

The vessel is safe now

And a report of a Swedish warship capturing some suspected pirates, loaded with normal fishing equipment, here:

Early this morning suspected pirates attacked a Greek Bulk Carrier in the Gulf of Aden. The pirates fired upon the ship with small arms and RPG (Rocket Propelled Grenade). A distress call was picked up by the EU NAVFOR Swedish warship HMS MALMO which immediatelly proceeded to the area.

MALMO then got visual contact with the attacking skiff and fired warning shots and flares. The skiff stopped after pursuit and was boarded by a VPD (Vessel Protection Detachment) sent out from MALMO. On board the skiff some weapons, GPS equipment, grappling hooks and barrels of fuel were found. 7 suspected pirates were captured and are at present being held on board HMS MALMO for further investigation.