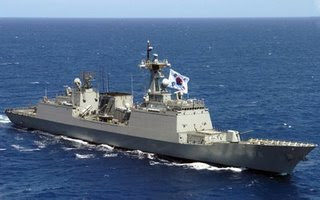 A South Korean naval patrol has saved a North Korean ship from attack by pirates in the sea off Somalia, military officials in Seoul have said.

South Korea's joint chiefs of staff said in a statement on Monday the unnamed North Korean ship had sent a distress call that it was being chased by pirates.

Snipers were sent to the area on board a helicopter after a South Korean warship picked up the signal.

The pirates gave up the chase after the snipers fired warning shots, the statement said.

The statement said the North Korean ship had sent a message of thanks to the South Korean warship, but did not say when the incident took place.

"The pirates came close to the North Korean ship but retreated as our helicopter approached," a South Korean military spokesman told the AFP news agency.