Excellent summary of the issues facing the countries who are undertaking putting captured Somali pirates on trial from the BBC in "Pirates in the dock":

***
The appearance of five suspected Somali pirates in court in the Netherlands this week and the scheduled court hearing of a Somali teenager in New York on Thursday have focused attention once more on the legal challenges posed by 21st-century piracy.

Reports that some of the suspects were enjoying their stay in Dutch prison cells and were considering eventually claiming asylum, were met with disdain by the country's foreign minister who was quoted as saying he would prefer it if they were being tried in Kenya under UN auspices.
***
But, as Cyrus Mody from the International Maritime Bureau points out, the length of time taken bringing some of these cases to trial indicates the complexities involved.

The logistical and legal burdens involved in transporting pirate suspects to Western countries can be daunting, he says.

"It is difficult getting the pieces together, the evidence, the witnesses. Who's going to pay for it all?

"And if a prosecution fails, the burden lies with that country. There is always the prospect the suspected pirate might then claim asylum," he told the BBC.

Because of such difficulties, countries are reluctant to conduct their own trials.

Geoffrey Till, professor of Maritime Studies at Kings College in London, told the anti-piracy conference that some navies were wary of bringing suspects back for trial because of European Union human rights laws, which guarantee all people, including pirates, respect for their basic rights.

Piracy is defined by UN conventions as a universal crime and each country may arrest pirates at sea and prosecute them at home.

But whether a country can prosecute arrested pirates depends on its own laws. Several countries do not know how to incorporate the convention into their domestic jurisdiction.

A lawyer for one of five suspected Somali pirates being prosecuted in the Netherlands described his client Monday as a modern-day Robin Hood driven by poverty to hijack ships.

This isn't too surprising, since the pirates have long insisted they are de facto coast guard units, protecting the Somali coast from foreign exploiters and that the exploitation has ruined the Somali fishing grounds, forcing the former fishermen to seek other ways to earn money. Other ways including hijacking ships carrying free food for other Somalis and threatening to kill innocent crew members of ships that have had nothing to do with Somalia at all.

A federal grand jury has now indicted the only Somali pirate in U.S. custody. He was captured as part of the Maersk Alabama attempted seizure. Reported here:

A Somali teenager whose role in the commandeering of an American cargo ship thrust him into the international spotlight has been indicted on multiple piracy charges, authorities said Tuesday.

Abdiwali Abdiqadir Muse — the only pirate to survive the siege — has been jailed in Manhattan since he was captured on April 12 and flown to the United States to face what's believed to be the first U.S. piracy prosecution in more than a century.

Muse, 18, was expected to enter a plea later this week on 10 counts, including piracy under the law of nations, conspiracy, hostage-taking, kidnapping and possession of a machine gun while seizing a ship by force.

Now, a common lawyer saying is that a grand jury is so much under the prosecutor's sway that a prosecutor could "indict a ham sandwich" if he wanted, though there would seem to be plenty of evidence available in the Muse case. And the money to fly in witnesses, etc. 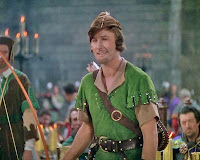 If I were Muse, I would ask to see a menu of the educational opportunities available in federal prison and see if I could get a head start on that GED and college prep. And ask for a green suit with a nifty hat with a feather in it.
Posted by Mark Tempest at 5/21/2009 08:21:00 AM