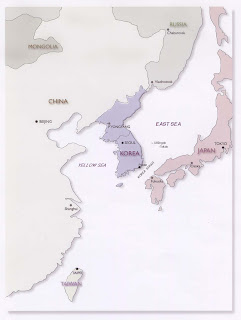 One day after North Korea warned of a possible attack against the South, the United States and South Korea ordered their forces here to their highest alert for three years, increasing surveillance flights and satellite reconnaissance to counter what officials termed a “grave threat.”

North Korea, reiterating its assertion made in January that all agreements with South Korea are dead, including the maritime "northern limit line" separating the DPRK (North Korea) waters from the ROK (South Korea) waters. Without an agreed line, international law would recognize a 12 mile limit for the territorial waters. a problem with that limit are the numerous islands that dot the coast of the Korean peninsula, each island extending the 12 mile base line. 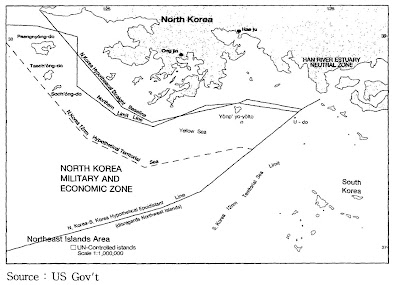 Some of the recent threatening North Korean language involves the U.S. threat to lead a group of navies in boarding and searching all North Korean vessels leaving the DPRK:

North Korea intensified its threats against South Korea and the United States on Wednesday with warnings of a “powerful military strike” if any North Korean ships were stopped or searched as part of an American-led operation to intercept vessels suspected of carrying unconventional weapons.

Diplomatic efforts are underway at the UN to bolster existing snactions:

Diplomats said American and Japanese officials were drafting a Security Council resolution that would concentrate on five or six ways to flesh out existing sanctions against North Korea that had never been enforced. Although China supports the idea of sanctions, it wants to work slowly and to bolster measures first passed in 2006 rather than creating new ones, they said.

Technically a state of war currently exists between the ROK, its allies and the DPRK. An extended armistice has been in place for 55 years, but the unilateral renunciation by one side to the agreement ought to have some meaning - in this case, that the war is back on and that DPRK ships are fair game for seizure, boarding and attack by ROK and UN forces.

According to this the North Koreans say the "truce" is over:

South Korea and the United States raised the military alert level for the peninsula on Thursday after the communist North warned the truce ending the Korean War was dead and it was ready to attack.

With the DPRK asserting that the truce is dead, there would seem to be no limits to any allied activity regarding DPRK shipping. The question being who will send ships to enforce the Proliferation Security Agreement, previous "deals" with the DPRK and war at sea.

UPDATE: More on the PSI and the DPRK from here:

South Korea, still divided from the North by a heavily fortified border, had responded to the nuclear test by joining the Proliferation Security Initiative, a U.S.-led movement to stop ships from transporting banned nuclear goods.

Pyongyang lashed out at both the U.S. and South Korea, calling Seoul's move to join the PSI tantamount to a declaration of war and a violation of the truce keeping the peace between the two Koreas.

"Full participation in the PSI by a side on the Korean Peninsula where the state of military confrontation is growing acute and there is constant danger of military conflict itself means igniting a war," North Korea's Committee for the Peaceful Reunification of Korea said in a statement carried on state media.

The regime warned that it would "deal a decisive and merciless retaliatory blow" to anyone trying to inspect its vessels.

North Korea's army said it would be "illogical" to honor the 1953 armistice between the two Koreas, given the violations by the U.S. and South Korea, and said it could no longer promise the safety of U.S. and South Korean warships and civilian vessels in the waters near the maritime border.

North Korea, as is its wont, blames the U.S.:

An official newspaper of the Democratic People's Republic of Korea (DPRK) on Tuesday urged the United States to apologize for its infringement on the DRPK's autonomy.

Rodong Simun said the Barack Obama administration was taking a both hard and placatory line toward the DPRK. They held an "olive branch" in one hand and an "arrow" in another hand, but the emphasis of the tactic was "arrow." The so-called "talks" alleged by the United States were only favorable conditions that Washington created for shooting the "arrow."

No matter what others say, the DPRK would do things in its own way, especially regarding the Korean Peninsula's nuclear issue and the DPRK-U.S. relationship, the newspaper noted.

If it were me, I'd "apologize" by moving a couple of more carriers toward the area and a bevy of smaller ships for interdiction purposes.

The North Koreans have now proven that they can make a viable nuclear weapon. They are believed to have enough fissile material to make several weapons, a couple of years ago, the estimate was 12 weapons.

In addition, the DPRK is believed to have large stocks of chemical weapons. See here:

... in 1997, the U.S. State Department, in response to questions posed by U.S. Senator Thad Cochran, stated that North Korea was, in fact, "believed to have a sizable stockpile of chemical weapons." The MND has been more specific. It claimed in 2003 that North Korea had produced "over ten kinds of lethal chemicals that include nerve, blister, and blood agents" and had a stockpile of "some 2,500 to 5,000 tons of these chemical agents."

UPDATE: Wikipedia reports on the forward deployed warhships of the U.S. Navy:

The U.S. Pacific Air Forces include about 375 air craft located in South Korea, Japan, Guam and Alaska. In addition to George Washington, the Navy lists two other carriers as operating in the Pacific. Japan has a substantial Maritime Self Defense Force (100 ships), as does South Korea (150 ships). Good source of Asian navy info: Maritime Asia.
Posted by Mark Tempest at 5/28/2009 07:47:00 AM