The Axis of Evil Rises Again 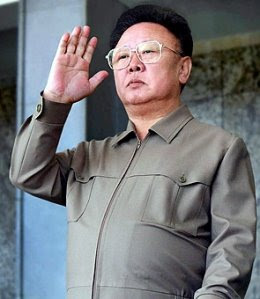 Let the dangerous games begin again as set out in Kim's Nuclear Fallout:

If history is any guide, Kim's strategy is to keep escalating with tests and proliferation until he extorts another round of money, aid and global recognition. This time in particular he's testing President Barack Obama and his vow to "engage" the world's rogues.

By early accounts, yesterday's underground test outside the northeastern city of Kilju was successful. If the initial reports of a 10 to 20 kiloton blast are true, then the North's scientists have come a long way since their first test in October 2006. That blast registered less than a kiloton and was widely considered a failure abroad, if not in the North, where Kim used it to bolster his prestige.

In response to that test, the Bush Administration and China at first increased sanctions and diplomatic pressure. But they quickly turned to strike a deal offering Pyongyang aid and recognition in return for the North's promise to dismantle its nuclear programs.
***
Kim is now going back to his familiar playbook with Mr. Obama in the White House, and he can't be displeased with the reaction. After the North launched a long-range ballistic missile over Japan in April, Mr. Obama declared that "Rules must be binding. Violations must be punished. Words must mean something. The world must stand together to prevent the spread of these weapons. Now is the time for a strong international response." But the U.S. couldn't even get a Security Council resolution at the U.N. and had to settle for a nonbinding "presidential statement" of rebuke.
***
The stakes here go beyond the ambitions of one nasty regime. North Korea has shown in the past it is willing to sell its missile and other technology around the world, not least to Iran and Syria. The mullahs in Tehran and other rogues are also carefully watching the response of the new American President as they contemplate the costs of their own WMD ambitions. Mr. Obama won the White House while promising that his brand of kinder, gentler diplomacy would better rally the world against bad actors. Now is the time to prove it.

What's the compromise position for someone who wants you dead? Not all disagreements can be resolved with mediation.

Consider the North's goals. First and foremost, Chairman Kim wants the international community to recognize his nation as a nuclear-weapons state. Second, the regime seeks to destabilize the South Korean government of President Lee Myung-bak, who has taken a much tougher approach to Pyongyang than his two predecessors, Kim Dae-jung and Roh Moo-hyun. Third, Great Leader Kim -- he has been trying to elevate his status from "Dear Leader" -- undoubtedly wants additional assistance from international donors to alleviate the hardship caused by the four-year downturn in the North Korean economy. And as always, Pyongyang's ruler hopes to bolster the popularity of his regime among hungry North Koreans -- and the senior generals whose backing he needs to continue his increasingly tenuous rule and to pass power to one of his ill-prepared sons.
***
Yet Kim had one more objective in mind when he set off the nuclear device in Kilju yesterday. And that reason alone should be sufficient to put North Korea at the top of the foreign-policy inbox for the next several years. The official Korean Central News Agency said this immediately after the detonation: "The results of the test helped satisfactorily settle the scientific and technological problems arising in further increasing the power of nuclear weapons and steadily developing nuclear technology." Ominously, this does not look like idle propaganda. This is sales talk. North Korea appears set to go into high gear and merchandise its nuclear arsenal.

North Korea's last nuclear test, in October 2006, was by all accounts a dud. The North Koreans were too ambitious in their designs, used unsuitable plutonium, or had not mastered the intricacies of the triggering device. In any event, the yield was less than a kiloton, well below the four kilotons they had predicted when they gave the Chinese a warning of the test. To get over the embarrassment of the "fizzle," Kim's technicians had to detonate another device to validate their designs and demonstrate the power of their weapon. The Iranians who witnessed the event three years ago could not have been overly impressed with the low yield. And Tehran is an important customer to the North Koreans, because the Islamic Republic has, in all probability, funded at least one acquirer of Kim's nuclear technology.

That acquirer would be Syria, which was building what looked like a reactor of North Korean design in their desert. The Israelis destroyed that secret facility in September 2007 in a daring air raid. We do not know at this moment if Damascus has abandoned its nuclear ambitions, but it is clear the Iranians have not. They are somewhere between one to three years to a working nuclear device of their own. Undoubtedly, we will hear in the next few months reports that Tehran's technicians were again witnesses to yesterday's test.

There is no greater threat to the United States than the proliferation of nuclear weapons to dangerous and hostile regimes. The Bush administration, however, never made North Korea pay any price for crossing the "red line" of selling nuclear technology. In fact, Bush policy in later years centered on providing benefits to Pyongyang for its continued participation in denuclearization talks. The American failure to impose consequences on the North apparently led Kim to think he could continue to design, test and even spread weapons technology.
***
We could be at one of the most consequential moments of our times. North Korea is taking on the world, and we have no choice but to respond.

UPDATE: Some thoughts at One Free Korea in Nuclear Groundhog Day in North Korea. And at DPRK Studies: "Why North Korea Conducted a Second Nuclear Test":

What it’s not about: Finally, Pyongyang did not conduct this second nuclear test because it felt ignored or wanted more attention from the Obama administration. It’s a reason that gets attached to many North Korean actions as sometimes North Korean acts of brinkmanship are indeed meant to get America’s attention, but not this time I think. After the April TD-2 test, North Korea threatened to escalate – what we’re seeing now – if the UN even discussed the TD-2 issue. A ridiculous and absurd demand, since the UN Security Council was practically guaranteed to make some sort of watered down statement. North Korea likely had a nuclear test planned before April and only the most unrealistic of responses from the U.S. would have prevented it.