What follows is not really a headline that creates the proper image, is it? "Aussie ships assist in pirate attack" - though it means the Aussies engaged some pirates off Somalia:

Two Australian warships have rushed to the aid of a freighter under attack in the Gulf of Aden from pirates firing rocket propelled grenades and attempting to board the vessel by force. 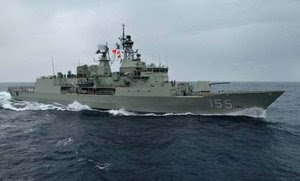 HMAS Sydney and HMAS Ballarat responded to a distress call from the merchant vessel, MV Dubai Princess, at about 6pm Australian time on Sunday.

Upon receiving the distress call, the Sydney closed in on the merchant vessel and launched a helicopter to assess the situation, while the Ballarat went to action stations. 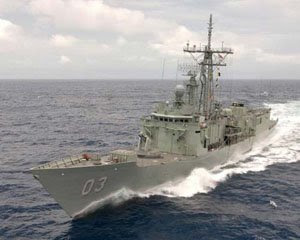 As the situation developed, another merchant vessel, MV MSC Stella, was also harassed by small vessels in the same area.

The head of the Australian Defence Force, Air Chief Marshal Angus Houston, said the measured response by the two Australian ships provided security to the merchant vessels and stabilised the situation.

"Sydney closed in on the merchant vessel and launched her embarked Sea Hawk helicopter to gain an appraisal of the situation," Air Chief Marshal Houston said in a statement.

"About the same time, Ballarat went to action stations and joined the response. She was instrumental in supporting MV MSC Stella." 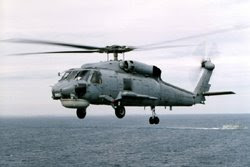 The pirates fled the area after the two frigates and the helicopter appeared. The action is believed to have taken place about 170km south of Yemen.

"It appears the situation de-escalated once Sydney and Ballarat asserted their presence at the scene and from the reports we have, no injuries were suffered by merchant sailors."