Before Arizona: "Border Emergency Declared in New Mexico" - in 2005 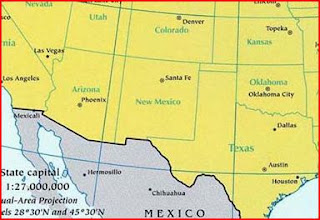 Richardson pledged an additional $1 million in assistance for the area, his office said in a news release.

He said on CNN that the funds will be used to hire additional law enforcement personnel and pay officers overtime.

In announcing the state of emergency, Richardson -- a Democrat who served in President Clinton's Cabinet -- criticized the "total inaction and lack of resources from the federal government and Congress" in helping protect his state's residents along the border.

And my post on the topic at the time where I wrote here:


By ignoring minor incursions, we now have a much larger and more complex issue to deal with. While I am not a fan of Governor Richardson, I do admire his effort to do something now on this problem. I can only hope the politicos in Washington will act cuanto antes to make sure we remain a country open to legimate immigrants and genuine guest workers who are willing to obey our laws. Law breakers and scofflaws deserve no special treatment. I cannot imagine that we can long continue to allow this particular "broken window" to remain unrepaired.

Of course, with a Hispanic governor and a Republican president, the New Mexico shout out mostly was an attempt to embarrass the Bush Administration and did not receive the attention that the Arizona law and situation has, with cries of racism and all. In fact, I don't think Rev. Sharpton even phoned.

In fact, I can't recall any suggestions at the time that New Mexico be boycotted...

Of course, some NM legislator had a short memory as seen here:

Nice. Welcome illegal border crossers from a foreign country and insult a neighboring state.
Posted by Mark Tempest at 9/13/2010 10:41:00 PM