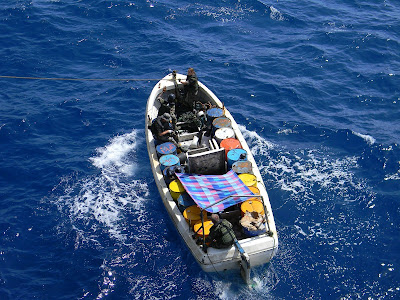 You can call it whatever you like, but I call it a blockade (look at Section II, Methods of Warfare, Sect 93 to 108).

What am I referring to? This - EU naval force flagship disrupts large pirate group:


On 17 September, while executing a patrol along the Somali coastline, the crew of EU NAVFOR ship FS DE GRASSE located and disrupted a Pirate Action Group comprising of six boats. She thus prevented them from reaching the shipping lanes on the high seas to conduct attacks on merchant vessels.

On 16 September, the helicopter from the EU NAVFOR ship FS DE GRASSE was conducting a routine patrol when it spotted suspicious boats on a beach, loaded with pirate paraphernalia (ladders, fuel tanks…), indicating the imminent departure to sea of a Pirate Action Group.

The following morning, the same helicopter from FS DE GRASSE relocated this same group at sea. This time, the Pirate Action Group comprised of several skiffs and a whaler; a boat of larger size and often used as a refuelling asset without which the skiffs cannot sail far enough to conduct attacks. 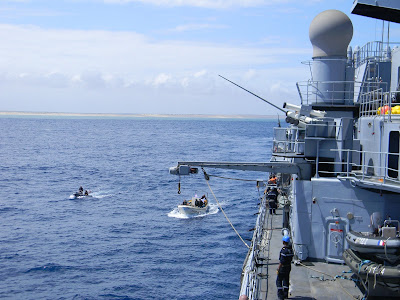 A first skiff of this group was quickly disrupted by the boarding team of FS DE GRASSE and was sent back to shore, having removed all the pirate paraphernalia. The French destroyer then steamed at high speed towards a second position provided by her helicopter to intercept the whaler. Once the whaler had been placed under surveillance, the boarding team of FS DE GRASSE chased and successfully disrupted the two remaining skiffs that were still in range.

In total, twelve suspected pirates and four boats (three skiffs and one whaler) were intercepted; two further skiffs fled the scene. As none of the pirates were caught in the act of piracy, it was not possible to proceed with a prosecution under international law. However, all of the equipment which could have been used for an attack was seized and one whaler and one skiff were destroyed.

Despite having to release the pirates, this action by the EU NAVFOR ship FS DE GRASSE has disrupted a pirate group’s action and successfully prevented them from reaching high seas to commit acts of piracy against vulnerable merchant vessels.

You know, when you prevent the bad guys from going to sea to do harm, that's a blockade. And a damn good idea.

EU Photo captions and my comments (top to bottom) (click on pictures to enlarge them):

"The whaler intercepted by EU NAVFOR was used as a logistical asset for the five skiffs."

I guess this is the "whaler" that had to be destroyed. Note the large amount of fuel. The pirates appear to have been ready to engage in some serious "ship hunting."

EU NAVFOR FS DE GRASSE, the whaler, and the warship's boarding team (from right to left)

Note the beach in the background. the De Grasse is not doing high seas patrols . . .
Update: more thoughts on blockading the Somali pirates: