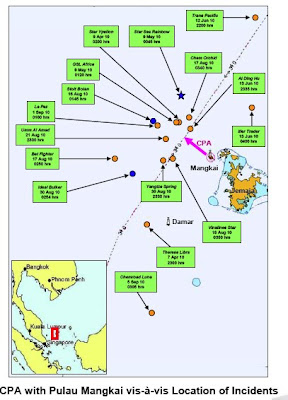 Platts reports Tankers targeted most in South China Sea piracy attacks: watchdog. This is based on a RECAAP report that can be downloaded here as ICS Special Report 3/10.

In 2010 to date, 16 attacks on merchant vessels have occurred within 60 miles of the island Pulau Mangkai. (see nearby ReCAAP map).

Fifteen of the attacks succeeded, resulting in robbery and assault of the crews. The loot has included cash, radios and computers. Weapons shown by the pirates include guns and long knives.

Despite the Platts' headline, the ReCAAP ISC states that "No specific types of ships were targeted."

A slightly larger number of tankers of various types have been attacked. My view is that with lower freeboards, tankers are easier to climb aboard for the pirates.

ReCAAP is calling for a similar agreement among the countries of the area as that which greatly slowed attacks in the Strait of Malacca. See my earlier post on this topic.
Posted by Mark Tempest at 9/14/2010 10:10:00 AM