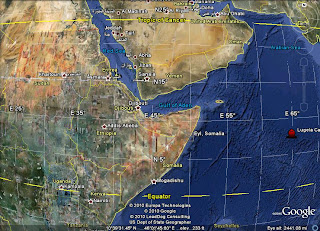 
In the early hours of 25 September, the Panama flagged MV LUGELA sent a distress alert to its Greek operator.

The vessel was in the Somali Basin, approximately 900 nautical miles East of Eyl, Somalia. A short while later, the vessel altered course to sail towards the Somali coast. There has been no contact with the ship throughout this incident.

After having transited through the Gulf of Aden, the MV LUGELA was sailing in direction of Republic of Mauritius with a cargo of steel bars and wires. The MV LUGELA, deadweight 4,281 tons, has a crew of 12, all Ukrainian.

UPDATE: The ship has been released by the pirates according to the the EU MSC(HOA) here:

The Panama flagged MV LUGELA, which was reported on 25 September as been pirated, 900 nautical miles east of Eyl, in the Somali Basin, had been abandoned by pirates.

Late on 26 September, the company owning the ship stated that the pirates had abandoned the vessel and that it was now underway to a place of safety. The 12 Ukrainian crew are reported to be safe and EU NAVFOR is monitoring the situation.