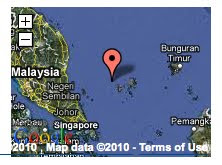 Six pirates armed with guns, knives and steel rods boarded a tanker underway. They entered the bridge and took hostage three crew members and tied up their hands. The pirates also took hostage master when he opened his cabin door. Pirates stole ships cash, crew and ship's properties before escaping.

This is the seventh attack on ships in this area since August 1 (see here) and since the beginning of 2010, there has been a surge in attacks in the area (red arrow on map below points to area of most recent attack): 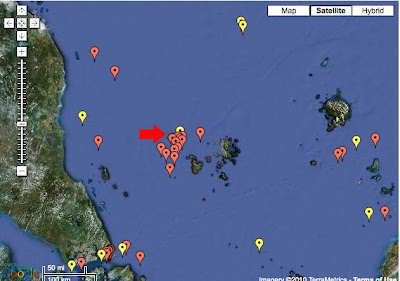 And, a slight revision to the ReCAAP map of attacks in the the area since 1 August 10: 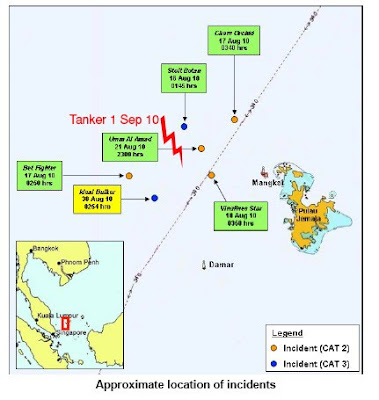 These attacks have led to calls to Indonesia to boost patrols in the area, as set out here:


An international maritime group urged Indonesia on Thursday to increase patrols in the South China Sea after pirates attacked nine vessels in less than three weeks.

The International Maritime Bureau said pirates armed with guns and machetes had robbed tankers and bulk carriers of cash and other valuables in the attacks off the Indonesian islands of Mangkai, Anambas and Natuna.
This brought the number of pirate attacks so far this year to 26 in the area, which is a transit route used by vessels heading southeast to the Singapore Straits or northwest to East Asia and the Pacific Ocean. Only seven attacks were reported all of last year.

The IMB is exactly right - while these are not the ship grabbing attacks like those conducted by Somali pirates, they are dangerous (3 sailors injured in August) and disruptive of a major sea lane.

The pirates, once again, are operating in an area where the territorial waters of two countries meet - Malaysia and Indonesia (Pulau Mangkai is Indonesian).

This may become important if Malaysia and Indonesia don't make an agreement covering the area, as noted in older post:


Some Piracy Law from UNCLOS concerning the right of hot pursuit:

Article 105. Seizure of a pirate ship or aircraft
On the high seas, or in any other place outside the jurisdiction of any State, every State may seize a pirate ship or aircraft, or a ship or aircraft taken by piracy and under the control of pirates, and arrest the persons and seize the property on board. The courts of the State which carried out the seizure may decide upon the penalties to be imposed, and may also determine the action to be taken with regard to the ships, aircraft or property, subject to the rights of third parties acting in good faith.
***
Article 111. Right of hot pursuit
1. The hot pursuit of a foreign ship may be undertaken when the  competent authorities of the coastal State have good reason to believe  that the ship has violated the laws and regulations of that State.  Such pursuit must be commenced when the foreign ship or one of its  boats is within the internal waters, the archipelagic waters, the  territorial sea or the contiguous zone of the pursuing State, and may  only be continued ouside the territorial sea or the contiguous zone if  the pursuit has not been interrupted. It is not necessary that, at the  time when the foreign ship within the territorial sea or the  contiguous zone receives the order to stop, the ship giving the order  should likewise be within the territorial sea or the contiguous zone.  If the foreign ship is within a contiguous zone, as defined in article  33, the pursuit may only be undertaken if there has been a violation  of the rights for the protection of which the zone was established.

3. The right of hot pursuit ceases as soon as the ship pursued enters  the territorial sea of its own State or of a third State.
***