Eighty-five people in a disabled "migrant" boat adrift in the Gulf of Aden . . . resulted in a rescue and tragedy as set out here:

The skiff was initially discovered at approximately 7:30 a.m. local by the Republic of Korea vessel, ROKN Wan Geon (DDG 978), which passed the skiff's position to Winston S. Churchill, operating in the vicinity.

The skiff was carrying approximately 85 passengers, consisting of 10 Somalis and 75 Ethiopians.

Churchill crew members determined the engines were inoperable and attempted to effect repairs, but were unsuccessful.

The RHIB then began towing the vessel to safety out of the Gulf's maritime traffic corridor and toward the coast of Somalia. 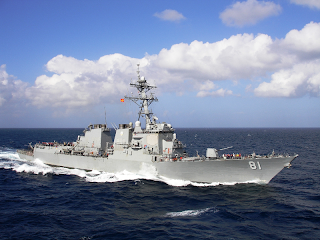 At 8:30 local Sept. 27, while transferring humanitarian supplies to the skiff, the passengers rushed to one side and the skiff began taking on water, quickly capsizing and sinking rapidly, leaving all 85 passengers in the water. Winston S. Churchill immediately began conducting search and rescue operations using an additional RHIB assisted by an Australian maritime patrol aircraft.

Despite the effort, approximately 13 passengers drowned, while 61 passengers were rescued and brought safely on board Winston S. Churchill. Eight passengers have been listed as missing.

Take a close look at the boat jammed with people, figure that they were being smuggled across the Gulf of Aden in a human smuggling operation . . . this tragedy was written long before Churchill showed up.