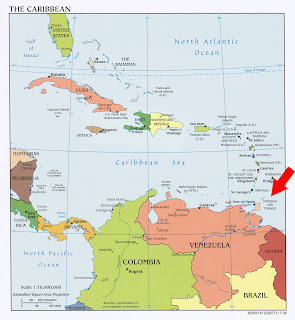 Reported as "Fishermen in fear" by The Trinidad Guardian:


Pirates who are stealing boat engines from fishermen have been exchanging them for marijuana in St Vincent, sources in the fishing industry are claiming. “The most amount of weed in T+T coming out of St Vincent,” the source said. “We understand these engines are going to St Vincent in return for a boatload of weed.
“These bandits are operating around all the fishing ports in the country and they are linked. “They operate out of one of the main rivers in south Trinidad.” The source said the marijuana is sold on drug blocks throughout T+T. He said while sea pirates have been stealing boat engines for years, the crime has escalated within recent times. The latest attack on fishermen occurred in the Gulf of Paria recently, resulting in the death of three fishermen from San Fernando and Claxton Bay.

T+T refers to Trinidad and Tobago.

A report on the earlier attack that left the three fishermen dead here. As noted in the main link, the act was unusually barbarous since the pirates wouldn't do anything to provide even simple flotation for the fishermen they tossed overboard.
Posted by Mark Tempest at 9/07/2010 12:27:00 AM