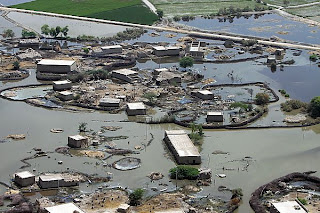 The title says, "The Coming Conflicts of Climate Change", but really it was about "natural disasters" and the consequences thereof:


The case of Pakistan reflects how natural disasters can weigh on U.S. national security considerations. Interest in these types of contingencies is such that the U.S. Navy recently conducted a gaming exercise at the Naval War College in Newport, RI, to study scenarios where the Navy might have to support U.S. or international relief efforts to help maintain regional and global stability. In each scenario, a climate-induced disaster (or disasters) triggered catastrophic death tolls, migration, and panic affecting regional or global security and spurring the UN Security Council to issue a humanitarian response resolution. This was the first time the Navy had conducted a gaming exercise to determine how to respond to climate-induced challenges. This unique effort brought together climate scientists, water experts, health practitioners, logisticians, diplomats, aid workers, and military officers to think through possible response options.

The exercise follows a real world trend of Navy support for humanitarian aid missions and responses to natural disasters at home and abroad.

I leave it to you to decide about the "climate change" aspect of the report, but I note that the U.S. Navy was heavily involved in two massive relief efforts caused by the shifting of the earth's crust - earthquakes - with its work in the Christmas Tsunami and Haiti. Closer to home, the Navy also provided assistance following the San Francisco earthquake and fire and many other such events.

See here, here, and here and the post found by clicking on the "Disaster Relief from the Sea" label below.

Still, nice to see an exercise devoted to the topic.

Email ThisBlogThis!Share to TwitterShare to FacebookShare to Pinterest
Labels: Disaster Logistics, Disaster Relief from the Sea