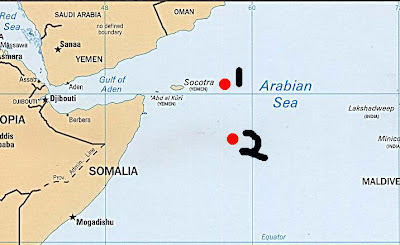 02.03.2008: 0237 UTC: 09:40.2N – 057:38.9E, 390 nm off Somalian coast.
An orange painted dhow with white stanchions, while drifting, called up a vessel five nautical miles away requesting them to stop because they had no food or water and they had 25 persons onboard. As the vessel altered course, the master noticed that the dhow had increased speed and was heading directly for them. Seeing this, the master suspected an attempted attack, altered course, and headed away form the dhow. The vessel and the dhow were both doing around 7 knots and after around 3.5 hours, the dhow altered towards Socotra Island. The same dhow returned to its original position and was later heard calling another vessel to stop. (#2 on the map - position is very approximate)
***
27.02.2008: 1100 LT: 13:05.6N-057:49.44E: 197nm East of Socotra Island.
A suspicious boat approached a yacht, sailing with two other yachts. The yachts downed their sails and used their engines to increase speed. The suspicious boat with about 16 people on board approached closer and offered fish in exchange for cigarettes but the yacht crew asked them to move away. The boat chased the yachts for about 15 minutes before moving away. (#1 on the map - position is very approximate)