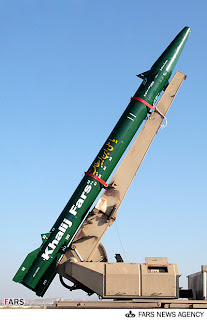 Steeljaw has been having a little fun with the wild and crazy Iran Not-So-Republican Guards and their recent announcement, here, of a new wonder weapon - "IRGC Mass-Producing Anti-Ship Ballistic Missiles":


"The IRGC's smart ballistic missiles are now in mass-production and this type of missiles can hit and destroy targets with high-precision," Jafari told reporters in a news conference here in Tehran on Monday.

"These new missiles enjoys supersonic speed and cannot be tracked or intercepted by enemy," the commander said, adding that missiles can hit targets 300km away with high-precision.
***
Elsewhere, Jafari also announced that the IRGC has just finished designing and developing long-range passive radars and will soon start production, adding that this new radar system covers within a 1,100km-radius.


Galen Wright of the blog Arkenstone has a post up analyzing the possible use of tactical ballistic missiles as anti-ship missiles. Might be worth a look.

As for the claims of stealth, accuracy and all that . . .

Email ThisBlogThis!Share to TwitterShare to FacebookShare to Pinterest
Labels: Iran, Iran IRGC, The War with Iran