Somali Pirates: Pirates Looking for Fuel and Food in Madagascar 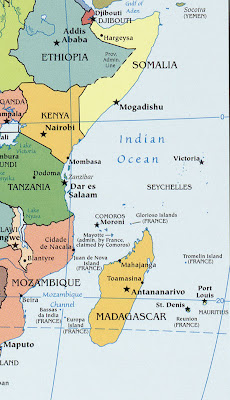 Interesting sea tale about a couple of Somali pirates and some of their hostages who were caught in Madagascar looking for fuel and food for a Comoros cattle carrier being used as a pirate "mother ship" found here. Google translation:


Accompanied by a Malagasy hostage, two Somali pirates aboard a speedboat landed Monday morning at the port of Antsiranana to stock up on fuel, spare parts and supplies. This information was revealed by coastguards Madagascar.

Both Somali pirates are coming from a band that has captured the Indian ship MV Ali Zoulfikar November 3, 2010, off Dar es Salaam (Tanzania), with its 29 crew members, including 4 Malagasy. After the attack, the ship carrying a cargo of cattle, served as a platform to Somali pirates off the coast north of Madagascar. According to the coastguard Malagasy, the Zoulfikar crashed in recent weeks on the high seas, following the bad weather caused by Hurricane Bingiza. Similarly, its occupants were short of food and water.

On board a speedboat, two Somali pirates, along with their hostages, in this case, two Comoros (the captain Soulihi Boinaheri), a Tanzanian and a Malagasy called Dodo Leonard (born in Mahajanga) decide to join the city of Antsiranana (Diego-Suarez) to look for supplies. Thus they were intercepted by the Coast Guard Madagascar.

The Malagasy authorities are preparing today for the release of twenty other hostages remained onboard Zoulfikar. A rescue operation that promises to be at high risk for twelve other pirates would be present on board the ship.

A part of the AFP version:


Madagascan authorities launched a search Thursday for a pirated Comoros-flagged vessel after the ship's captain and two suspected pirates arrived at the Indian Ocean island's shores to seek help.

The MV Zoulfikar was captured by Somali pirates in November while on its way to Tanzania from the Comoros. It had 29 people on board.

On Monday, a total of six people arrived on a small boat at Madagascar's northern Antsiranana port town to seek help. Among them were the MV Zoulfikar's captain and two Somalis suspected to be pirates.

"We have not found the boat. We have circled in planes but we have not spotted anything," said Rolland Rasolofonirina, the coordinator of Madagascar's anti-piracy efforts.
****
The arrival of the suspected pirates has baffled Madagascan officials as the sea bandits, who now prowl as far south as near Madagascar and the Seychelles, never dock at shores where they can be arrested.

"We are really surprised. It is the first time we are seeing suspected pirates giving themselves up to authorities," said Rasolofonirina.

Any port after a storm, I suppose.

If you missed the news about a cyclone near Madagascar, NATO has information:


The after effects of last week’s cyclone in the southern Indian Ocean continue to adversely affect the southern and central Somali Basin as well as the Somali Coast, though conditions are set to improve from 21 Feb onwards.