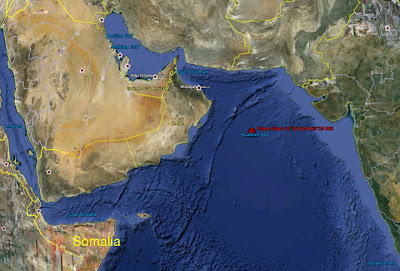 First, a report of a hijacked ship here:


On the afternoon of 12 February, the MV SININ is believed to have been pirated approximately 350 nautical miles East of Masirah (Oman) in the North Arabian Sea.

The vessel, which has a crew of 23 (13 Iranian and 10 Indian nationals), sent out a distress signal, saying she was under attack, late afternoon on Saturday to which an aircraft from the Combined Maritime Forces (CMF) immediately responded. The aircraft photographed 2 suspected pirate skiffs on board the vessel. There has been no communication with the ship since the distress signal was sent and the MV SININ has now changed course towards the Somali coast. There is no information on the condition of the crew.

The MV SININ is a Maltese flagged and owned Bulk Carrier. She has a deadweight of 52,466 tonnes and was on route to Singapore from Fujairah (UAE) when she was attacked. The ship was not registered with MSC(HOA) and was not reporting to UKMTO. EUNAVFOR is monitoring the situation.

MV Sinin may be one of the Islamic Republic of Iran Shipping Lines suspect vessels. It does appear on the OFAC SDN list here. OFAC is the Office of Foreign Assets Control (OFAC) located in the U.S. Department of Treasury. What that means is:


As part of its enforcement efforts, OFAC publishes a list of individuals and companies owned or controlled by, or acting for or on behalf of, targeted countries. It also lists individuals, groups, and entities, such as terrorists and narcotics traffickers designated under programs that are not country-specific. Collectively, such individuals and companies are called "Specially Designated Nationals" or "SDNs." Their assets are blocked and U.S. persons are generally prohibited from dealing with them.

See here for an earlier post on the IRISL ships.

Then a BBC report of a pirate mother ship being captured by a Danish warship here:

It said Denmark's warship fired warning shots on Saturday, forcing the vessel to stop and its crew to surrender.

Sixteen suspected pirates on board were then held and a weapons cache seized. Two Yemeni hostages were also freed.


"These ships provide the pirates with a floating base. They pose a great threat to the merchant shipping," the chief officer of the Danish warship said.

"We have now eliminated one of these threats," Commander Haumann of HDMS Esbern Snare warship said.