Somali Pirates: Guidance to Yachts by EUNAVFOR and ISAF 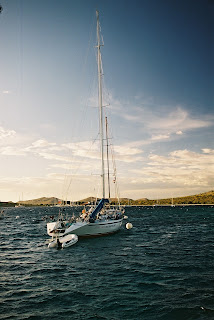 Last year, the EU's MSC(HOA) and the International Sailing Federation teamed up to produce some guidelines for yachts contemplating transiting the Indian Ocean into the Gulf of Aden. The final version of that effort can be found at Yachting Guidance One (or from MSC(HOA) here). The essence of the good advice is "don't do it":


The danger of piracy and consequent loss of life and property in the GoA (Gulf of Aden), Yemeni and the Somali waters (up to 750 miles offshore), is high. Yachts are strongly recommended to avoid the area.

Of interest to me are a couple of differences between the draft guidelines and what ended up being finalized.


and (2) the spread of Somali piracy.


The expansion of Somali piracy and the recent hijacking of an American yacht with the subsequent killings of the yacht owners and guests, has caused some yacht owners to load their yachts on larger merchant ships for transport to the Mediterranean:


The dangers of piracy are well-known to most experienced sailors, who monitor reports of attacks closely and often travel in groups through high-risk areas. But the killings have stunned the tiny, tight-knit international community of "blue water" sailors—adventurers and serious sea men and women who sail the globe for years at a time.

Now, many are changing course to avoid parts of the Indian Ocean and Arabian Sea, others are scrambling to arrange transportation for their yachts on cargo ships. Some are demanding government action against the pirates, or escorts across dangerous waters.

"We cannot allow a bunch of thugs to take an entire ocean away from the world. Ignoring this will be disrespecting the deaths of the crew of Quest," said Mr. Rouse, the Texan from his yacht, Bebe, anchored off of Cochin, India. (emphasis added)