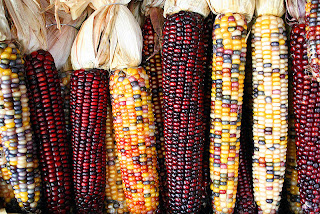 The World Bank says food prices are at "dangerous levels" and have pushed 44 million more people into poverty since last June.

According to the latest edition of its Food Price Watch, prices rose by 15% in the four months between October 2010 and January this year.
Food price inflation is felt disproportionately by the poor, who spend over half their income on food.

So, what's driving these food price increases? There are some thoughts here:


The prices of wheat, corn and soyabeans have hit 30-month highs over the past few days after bad harvests, export restrictions, extremely low inventories and soaring demand in emerging countries and for bio-energy in the US and Europe.

Ah, the demand for "bio-energy."

As warned about here: 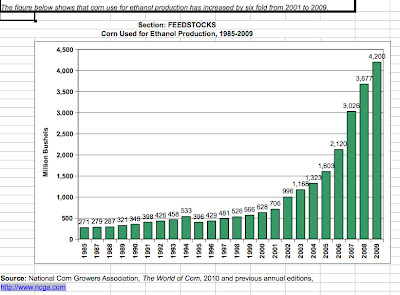 We are witnessing the beginning of one of the great tragedies of history. The United States, in a misguided effort to reduce its oil insecurity by converting grain into fuel for cars, is generating global food insecurity on a scale never seen before.

The world is facing the most severe food price inflation in history as grain and soybean prices climb to all-time highs. Wheat trading on the Chicago Board of Trade on December 17th breached the $10 per bushel level for the first time ever. In mid-January, corn was trading over $5 per bushel, close to its historic high. And on January 11th, soybeans traded at $13.42 per bushel, the highest price ever recorded. All these prices are double those of a year or two ago.
As a result, prices of food products made directly from these commodities such as bread, pasta, and tortillas, and those made indirectly, such as pork, poultry, beef, milk, and eggs, are everywhere on the rise. In Mexico, corn meal prices are up 60 percent. In Pakistan, flour prices have doubled. China is facing rampant food price inflation, some of the worst in decades.
In industrial countries, the higher processing and marketing share of food costs has softened the blow, but even so, prices of food staples are climbing. By late 2007, the U.S. price of a loaf of whole wheat bread was 12 percent higher than a year earlier, milk was up 29 percent, and eggs were up 36 percent. In Italy, pasta prices were up 20 percent.

So, it isn't bad enough that millions of people around the world have died from malaria due to a DDT ban that may not be justified (see here), we now seem to be helping to starve people.

And we may not be helping the environment all that much. See also Ethanol to take 30 pct of U.S. corn crop in 2012: GAO.