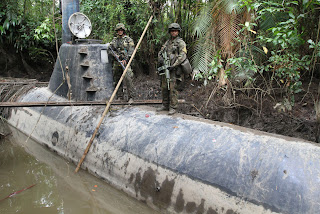 
Colombian soldiers have for the first time seized a fully submersible drug-smuggling submarine capable of reaching the coast of Mexico, authorities announced Monday.
***
Previous drug-carrying vessels found in Colombia were only semi-submersible, meaning part of the structure always remained above the surface.

But the sub discovered Sunday can operate completely underwater, Col. Manuel Hurtado, chief of staff of Colombia's Pacific Command, told The Associated Press. He estimated it could hold eight tons of drugs.
***
The 99-foot-long (30-meter) fiberglass boat has room for a crew of six and is powered by two diesel engines and has an air-conditioned interior, Hurtado said. He said it can submerge up to nine feet (three meters) deep and is equipped with a 16 1/2-foot (five meter) periscope.

"The engines were already fully installed and ready to go," Hurtado said.

The sub had "the capacity to sail totally underwater and the ability to travel to the coast of Mexico without surfacing," he added. He said such a trip would take eight to nine days.