While transiting in international waters, the merchant vessel reported that pirates were attempting to board the vessel. Momsen and Bunker Hill, which were in the vicinity, immediately responded to the Duqm's distress signal and caused two pirates skiffs alongside the vessel with ladders against its hull to flee the area.

Momsen and Bunker Hill tracked the skiffs movement and located the mothership that facilitated the attempted boarding of Duqm, towing the two empty skiffs. Consistent with the U.N. Security Council Resolutions on piracy and U.S. rules of engagement, Momsen destroyed the two skiffs to prevent their use for future attacks. 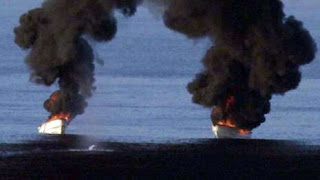 UPDATE2: Another photo added above -thanks Bryan!
UPDATE3: All photos of incident by Chief Hull Maintenance Technician John Parkin. Here's a third: 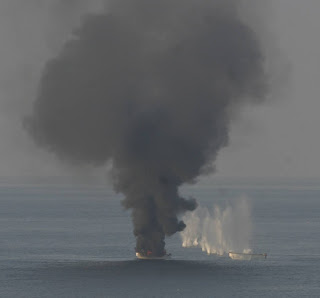