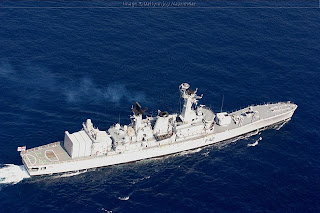 
NS Vindhyagiri a Nilgiri class frigate which collided with foreign merchant vessel M V Nordlake on Sunday evening around 5 pm , and later the ill fated frigate also caught fire due to collision ,today around afternoon it sank off the coast of Mumbai .

All naval officers and sailors have been rescued safely and not causalities have been reported so far , According to an official, INS Vindhyagiri was returning to the dockyard while the merchant vessel was leaving Mumbai harbour when the two collided.

According to later reports, the vessel has settled in shallow water next to a pier.