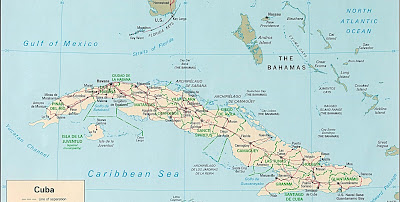 The U.S. Navy was fighting pirates in the 1820's - more specifically, the "pirates of the Caribbean."

Deploying ships from what is now Key West, Florida, the small navy took the fight to the pirates under the leadership of Captain David Porter. In addition to major ships, the fleet was equipped with various "barges" and "launches" with which to press the action. This has been discussed before. This post is meant to supplement that earlier post with respect to an action against pirates found at Sigaumpa Bay, Cuba (northern coast of the island).

In older nautical terms, a "barge" is not just one of those flat-looking cargo or garbage units now seen being pushed by tugs - they were larger boats rigged with two masts and a variety of sails or even galley-like sets of oars. They were generally flat bottomed to allow them to enter water too shallow for deeper draft ships. Often they were small enough to be transported to an area of interest by a larger ship.

Among Captain Porter's force were two such barges, Gallinipper and Mosquito named after stinging insects, quite appropriate for Porter's force, nicknamed the "Mosquito Fleet."

The fleet used these smaller vessels to extend the fleet's reach and as auxiliary fighting platforms. They proved instrumental in subduing the pirates. The official U.S. Navy history of the actions undertaken by the barge Gallinipper can be found here:


The barge Gallinipper was one of five ship's boats equipped with sails and double-banked oars in January 1823 for duty with Capt. David Porter's West India Squadron, known as the "Mosquito Fleet," fitted out under an act of Congress approved 20 December 1822 to cruise in the West Indies and Gulf of Mexico for the suppression of piracy.
***
In July, 1823 Gallinipper, Lt. W. H. Watson in command, with the aid of Mosquito, captured the pirate schooner Catilina and a launch near Sigaumpa Bay. Catilina, commanded by the celebrated pirate Diaboleto, lost about one-third of her crew of approximately 75 in the running fight. The barges pursued the schooner to the village of Signapa; as they closed to board, the pirates fled to their launch. A volley of musketry directed at the launch drove them into the sea where the boats cut off the retreat of all but 15. Even of these, 11 were killed or taken prisoner by the barges' men who landed in pursuit, and the remaining 4 were apprehended by the local authorities. Lt. Watson was highly commended by Captain Porter for his brilliant victory over a superior force without the loss of a man, and recommended to the Department for promotion. ***

A more intimate description of the action at Sigaumpa Bay can be found in news accounts which quote from Captain Porter's report to the Navy Secretary here:


Sir: Having had the honor to report ihe circumstances attending the cruise of the division under my orders, prior to our separation off St. John de los Remedios, I have now to communicate, for your information, my subsequent proceedings in the barges Gallinipper and Musquito.

After a strict examination of the coast and islands, from Cayo Francis to Cayo Blanco, in the vicinity of Point Hycacos, whilst cruising in Siguapa Bay, we discovered a large top-sail schooner, with a launch in company, working up to an anchorage, at which several merchant vessels were lying. Being to windward, I bore up with the Gallinipper, for the purpose of ascertaining their characters, and when within gun-shot, perceiving the large vessel to be well armed, and her deck filled with men, I hoisted our colors; on seeing which, they displayed the Spanish flag, and the schooner, having brailed up her fore sail, commenced firing at the Gallinipper. I immediately kept away, and ran down upon her weather quarter, making signal, at the same time, for the Musquito to close; having much the advantage in sailing, they did not permit us to do so, but made all sail before the wind, for the village of Siguapa, to which place we pursued them, and, after short action, succeeded in taking both vessels, and effecting the almost total destruction of their crews, amounting, as nearly as could be ascertained at the time, to 50 or 60 men, but, as we are since informed, to 70 or 8O. They engaged us without colors of any description, having hauled down tbe Spanish flag after firing the first gun; and, on approaching to board, (our men giving three cheers, and discharging their muskets), the pirates fled precipitately, some to their launch, (lying in shore, from whence a fire was still kept up), whilst others endeavored to escape by swimming to the land.— A volley of musketry, directed at the launch, completed their disorder, and drove them into the sea; but the boats going rapidly through the water, cut off their retreat, with the exception of fifteen— eleven of whom were either killed or desparately wounded, and taken prisoners by our men, who landed in pursuit: and the remaining four apprehended by the local authorities, and sent to Matanzas. The larger vessel was called the Catalina, commanded by the celebrated pirate Diaboleta, taken some weeks since from the Spaniards, between Havana and Matanzas, carried to Siguapa Bay, where she received her armament; had captured nothing, this being the commencement of her piratical cruise.

I cannot close this communication without performing a most pleasing task in reporting the active gallantry and good conduct of my officers and men, none of whom sustained the slightest injury in the action, the result of which, I trust, is sufficient to satisfy you that all under my orders did their duty, particularly when it is considered that we had but twenty six men, opposed to a force of piratical vessels, well supplied with arms of all kinds, amongst which was one long nine and two six pounders. I have much pleasure in naming, as my associates, lieut. Inman, acting sailing master Bainbridge, Dr. Babbit, midshipmen Harwood and Taylor; and Messrs. Webb and Grice, who obeyed and executed all orders and signals with a promptitude and zeal which could not be exceeded.

I have the honor to be, very respectfully, your obedient servant, W. H WATSON,

No hand-wringing, no waiting for approvals from higher command - just taking his units into combat and applying enough force to secure victory. A key to how pirates were swept from the Caribbean.

UPDATE: If the topic of the U.S. Navy fighting pirates in the Caribbean interests you, let me recommend you read James Fenimore Cooper's  History of the Navy of the United States of America available on Googlebooks and as a pdf download. See especially pages 578- 583 of the pdf (pages 23 - 27 of Volume II of the work).
Posted by Mark Tempest at 2/13/2011 01:17:00 PM